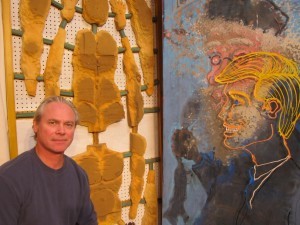 The artist with his work, Under Construction

Under Construction is made with acrylic on canvas, wood and vinyl, monofilament, graphite, foam, metal and found objects. 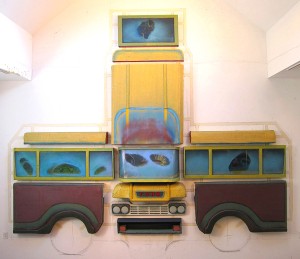 Reassembly Required is constructed with acrylic on canvas and wood, graphite and metal.

Monofilament, which is a very personal material to me, has value and emotional range running from a thin veil of dust to solid mass…Some pieces include aspects of storytelling and, I believe, American dark humor with respectful irreverence. 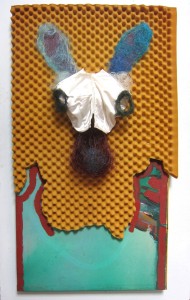 Cholly At Auction by Karl Jones

Cholly At Auction is composed of monofilament, wire, wood and a found object.

The sprue tree is a fixed snap shot of something or someone that has been born and built up as a plastic model kit but later held still by fate, disassembled and placed back on the sprue, a person in a state of suspension, unable to evolve; the schematic yet graphic portrait of a coveted object. 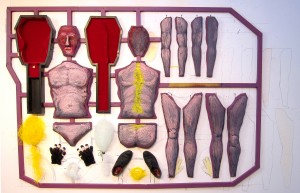 On My Sprue Tree by Karl Jones

On My Sprue Tree is made with acrylic on canvas, wood, metal, monofilament, graphite, foam and found objects.

I invoke an alternate form of a cautionary tale or human existence story involving attempts to evaluate their nature and qualities; capturing visceral moments, illusion and tapping into their unique idiosyncrasies. 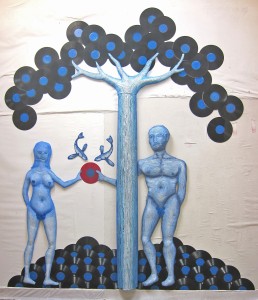 Passing On by Karl Jones

Passing On is composed of acrylic on canvas, wood and found objects. 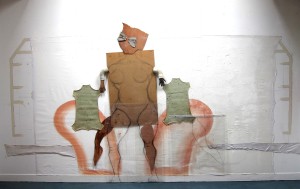 Strolling the Strand by Karl Jones