Back in the Day: Kennedy vs. Carter 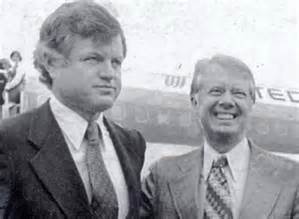 The 1980 Democratic Convention: “The work goes on, the cause endures, the hope still lives and the dream shall never die.”

Bernie Sanders’ reluctant endorsement of Hillary Clinton at the 2016 Democratic Convention offers a striking parallel to the Democratic convention of 1980. That year, an insurgent not unlike Bernie Sanders, Ted Kennedy, made a vigorous but doomed effort to release delegates from their primary pledges.

The 1980 Democratic convention in New York City will be forever remembered for Ted Kennedy’s electrifying concession speech, the final words of which are repeated in the above headline. You can read the entire speech here. An excerpt courtesy of YouTube is towards the end of this article.

Kennedy Goes All In

By the fall of 1979, certain political markers were gathering steam. A poll was released that showed incumbent President Jimmy Carter running five points or so behind the presumptive Republican nominee Ronald Reagan. A labor-backed “draft Teddy” movement was being organized for the Iowa Caucuses. A Boston Globe poll showed Carter trailing Kennedy in a hypothetical match-up by 22 points.

The Kennedy camp’s response to the insurgents was “cool it.” Ted Kennedy liked to think of himself of as a loyal, party-line Democrat. But there was a major crack in the foundation that was Democratic Party unity. The progressive wing of the party was flexing its muscles over and issue near and dear to Ted Kennedy’s heart: health care.

Kennedy wanted a “health care for all” program with a price tag of at least $28.6 billion. President Carter’s proposal seemed limp in comparison. “The exercise,” remarked one Kennedy staffer, “is moving the president, not kicking him in the behind.” (Sound familiar?)

The chasm grew wider and the fight was on. 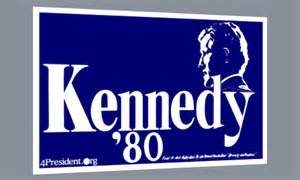 After a frustrating primary season in which President Carter remained above the fray (his “Rose Garden” strategy), Ted Kennedy arrived at Madison Square Garden trailing Carter by 700 delegates. Ted had even lost the New Hampshire primary, 48-38, a state in his own backyard.

Kennedy dispatched top aide Harold M. Ickes (future deputy chief of staff to Bill Clinton) and brother-in-law Stephen Smith to wrangle for delegates and create roadblocks for Carter on the convention floor. “It was a brutal political fist fight,” remembered Ickes. “Many people saw this as the last of the brothers carrying the family torch.”

Ted Kennedy of course came up short, and tasted the bitter disappointment that transcended a mere election loss. Ickes: “The senator had the additional burden of carrying the family legacy. It was a bitter loss for everyone, but it is a great testament to him that he put that behind him and went on to forge a stellar career in the Senate.” 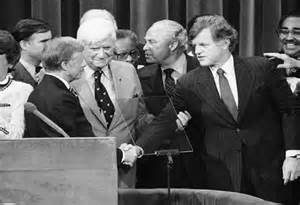 After conceding to Carter, Kennedy puts on a brave face for party unity.

The author of the speech, Bob Shrum, wrote this in Time magazine:

There is in that 1980 speech an insight into the long arc of his achievement: his belief in something bigger than himself, his persistence despite the odds, his capacity to express the conscience of the party and his party’s best possibilities.

John Podesta, who was recently President Obama’s chief of staff, exclaimed: “I was lucky enough to be on the podium with him. It was the most electric moment of my life before or since. It felt like fireworks after every word.”

President Jimmy Carter of course lost to Ronald Reagan in the 1980 presidential election. In my view, Kennedy’s insurgency was not much of a factor. An inflationary economy and the Iran hostage crisis sealed Carter’s fate.