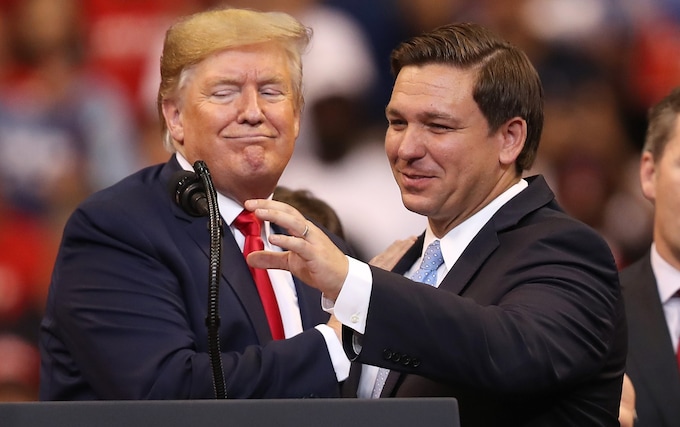 DeSantis uses minorities and immigrants as props to enflame his white grievance base. It just might blow up in his face.

Is Ron DeSantis positioning himself to be the heir apparent to Donald Trump’s MAGA throne? The Florida governor’s recent maneuvers that publicly demonized people of color (we’ll get to all of it) have pointed DeSantis in the right direction with the MAGA faithful.

In a poll published today (Sep. 21) by USA Today/Suffolk University, DeSantis leads Trump by a margin of 48-40% in a hypothetical Florida primary. This is a reversal from their poll published in January 2022 when Trump beat DeSantis, 47-40%.

Of course, Gov. DeSantis could be playing with fire with regard to his own reelection prospects. The polling reflects a hypothetical primary election. DeSantis is facing Democrat Charlie Crist in this fall’s general election in which all Floridians are eligible to vote. At the moment, the respected FiveThirtyEight gives DeSantis a 92% chance of winning in November.

However, reports from South Florida, where large swaths of Hispanics live, indicate intense displeasure with DeSantis’s antics. Florida has a 15.94% Black population. Could this be the game-changer Democrats are hoping for?

DeSantis must realize you can’t lead MAGA without a power base. 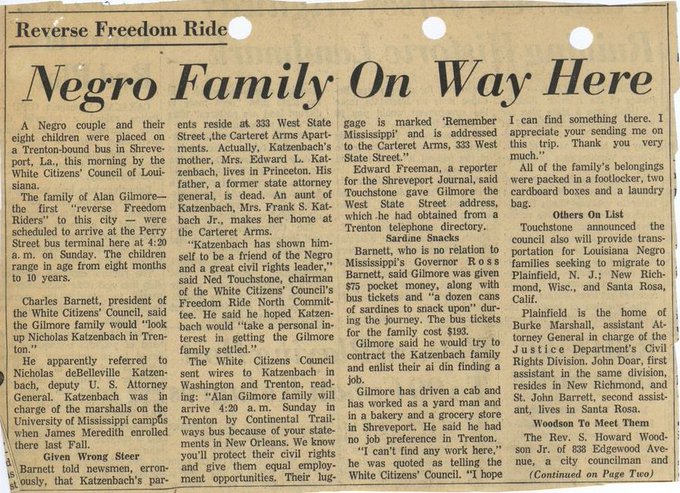 The May 1962, Trenton, NJ, newspaper clip captures one of the many instances when Southern white segregationists lured Black families onto buses with northern destinations with promises of housing, job prospects, cash, and even a “presidential welcome” once they arrived. It was of course a cruel hoax.

The “Reverse Freedom Rides,” which displaced approximately 200 human beings to unfamiliar towns all over the North, were meant to be payback for the onslaught of civil rights activists aiming to make things uncomfortable for southern bigots. 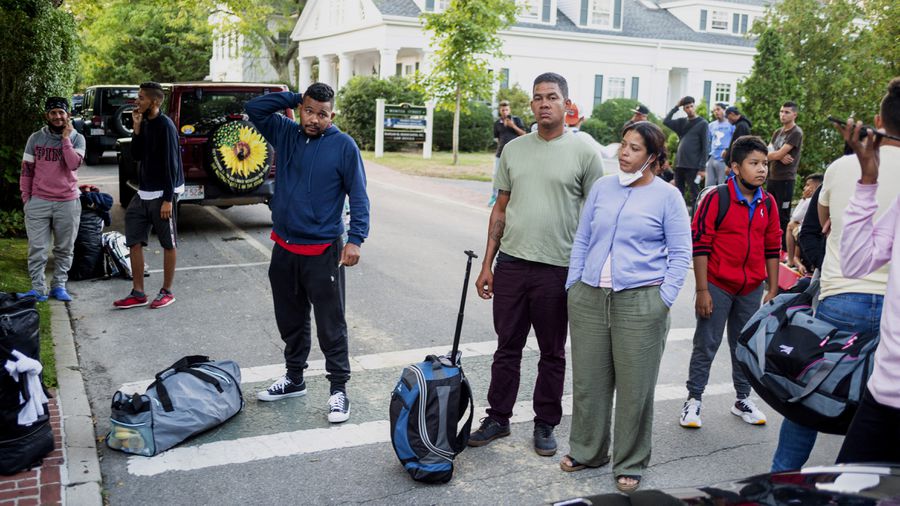 I don’t know Ron DeSantis so I can only guess why he filled two planes of Texas immigrants and dropped them off on the Massachusetts island of Martha’s Vineyard. Was he inspired by the Reverse Freedom Riders? Was he burnishing his MAGA credentials? Was he “owning the libs?” Whatever the reason, this was an act of cruelty.

DeSantis first convinced his legislature to pry $12 million from COVID relief money to pay for the adventure. His team then traveled to Texas (Florida doesn’t have a border with Mexico) where he found a Venezuelan migrant at a shelter in San Antonio and paid him a bird dog fee to find 50 of his peers to board a plane and maybe get a shot at a better life. The Venezuelans were not given their destination.

The Texas migrants’ landing on Martha’s Vineyard quickly became a video-op for Fox News. DeSantis coyly told Sean Hannity that he assumed that Martha’s Vineyard “said they wanted this by being a sanctuary jurisdiction.” This tortured logic could get DeSantis charged with fraud or human trafficking.

In breaking news, the migrants have engaged a civil rights law firm to file a federal class action lawsuit against DeSantis and his enablers. Around the same time, Bexar County (San Antonio) Sheriff Javier Salazar announced his office is investigating whether the migrants were victims of one or more crimes.

What DeSantis and Fox News don’t understand is that Martha’s Vineyard is not all playground for the rich (and famous, like Barack Obama). It is an island of farms and fishermen, many of whom work hard to make ends meet. “At heart, this is an island full of people who pull together,” explains Rebecca Haag, who runs an organization that fights hunger. “The people who sent those migrants here clearly did not understand this place.”

The people of Martha’s Vineyard worked overtime to make the 50 migrants feel at home, well-fed and safe, before securing their transfer to a larger facility on a military base on Cape Cod. 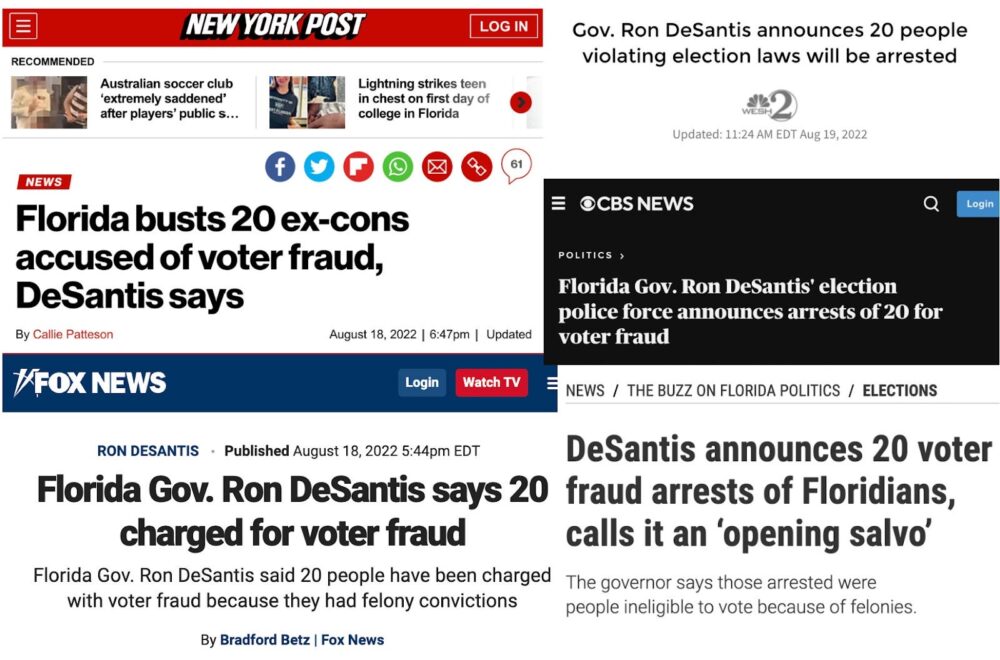 Along with demonizing minorities and immigrants, another prominent pillar of MAGA doctrine is claiming voter fraud especially if you don’t win the election.

A month ago, Gov. DeSantis held a press conference to announce the arrest of 20 Floridians for committing voter fraud. In conforming to the conservative creed that Democrats must be knee-deep in voter fraud, most of the 20 persons arrested were Black senior citizens.

As they say in football, upon further review…the accusation looked less and less like intentional election tampering or mischief and more and more like widespread confusion about what the new voter law said.

New voter law? Yes, in 2018, a referendum was passed that aimed to correct a vindictive vestige of Jim Crow election law. Nearly two-thirds of Floridians voted yes to restoring voting rights for convicted felons who had done their time. it was a sweet blow for human progress.

The Constitutional Amendment included exceptions to restoration: Felons convicted of murder or certain crimes of a sexual nature remained deprived of voting. Also, DeSantis and the Republican state legislature passed a law requiring felons to pay off old court fees and fines before they could reclaim their voting rights.

The 20 Floridians accused of voter fraud claim they had no idea that their crimes kept them ineligible to vote. That’s probably because the state of Florida had long ago approved their voter applications and issued them registration cards. They say they learned of their misfeasance after two years of voting when, in at least one case, a SWAT team showed up at their door to arrest them.

DeSantis washed his hands of the bureaucratic snafu, claiming it was a local issue. He got what he wanted. When asked once again about the arrests, DeSantis said: “I think this will help show people and disabuse them of maybe any lack of clarity that they have about what the rules are in Florida.”