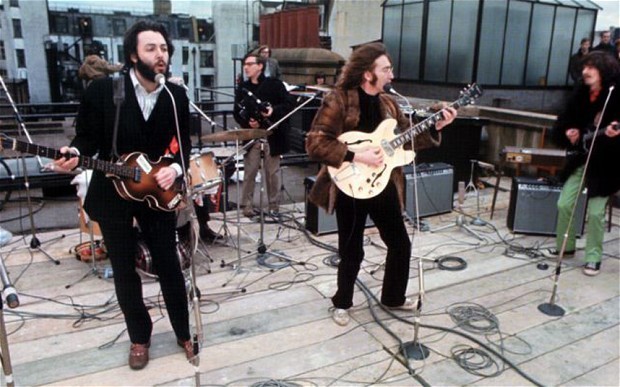 Despite rugged conditions, The Beatles gave it a shot. Abbey Road would follow. 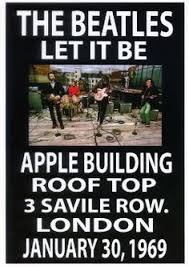 It started out as a solution to a problem: How to conclude a documentary on The Beatles eventually titled Let It Be, a seemingly never-ending affair with moments of exasperation and outright rebellion.

It might have been Paul who suggested a live performance (The Beatles’ first since August 29, 1966 at Candlestick Park in San Francisco), but the boys almost didn’t go through with it; they needed John to command, “Oh, fuck it–let’s do it.”

Ringo mused on the location:

There was a plan to play live somewhere. We were wondering where we could go–‘Oh, the Palladium or the Sahara.’ But we would have to take all the stuff [equipment], so we decided, ‘Let’s get up on the roof.’

So the Fab Four, with keyboardist Billy Preston (another “fifth Beatle”) in tow, walked up five floors to the rooftop of their spiffy new headquarters, Apple Corps, Ltd., 3 Savile Row in London. 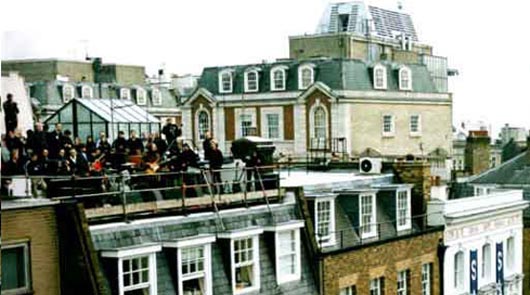 The cops were kind enough to call in advance to say they were coming to shut down the noise. “You could hear toilets flushing,” said an Apple employee. Source: pinterest.com. 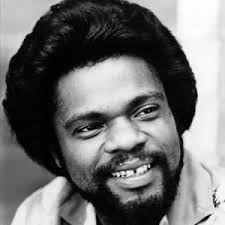 The 42-minute concert was basically nine takes of five Beatles songs that appeared on the 1970 release, Let It Be (and later, Let It Be…Naked). Here is the set list:

Notably, while the cameraman was changing film, the boys launched into a jam of Lennon’s composition, “I Want You (She’s So heavy),” which of course completed the “A” side of Abbey Road with a jarring silence.

Here is a cut from the rooftop, “Don’t Let Me Down,” published by VEVO and courtesy of YouTube:

There were some eccentric moments to this odd musical affair:

Here is The Beatles playing “Dig A Pony,” on the rooftop, published by jose navea via YouTube:

Many Beatles fans believe that the album Let It Be, with its back-to-basics approach, was the Beatles’ 12th and final studio album. Indeed, it was released on May 8, 1970, about a month after the Beatles’ official break-up.

However, according to Beatles historian Mark Lewisohn’s book, The Beatles: Recording Sessions, most of the songs included in the Let It Be album were recorded by the band around the time of the rooftop performance. Its delayed release had more to do with production scoring and mastering by producers Glyn Johns and Phil Spector (along with George Martin).

Lewisohn’s book makes it clear that the Abbey Road sessions, which began around April 1969, was the Beatles’ final studio endeavor. In fact, the last time the four Beatles were together inside EMI Studios was on August 20, 1969.

It is fitting and proper that Abbey Road, with its farewell to fans in the song “The End,” was destined to be the Beatles’ crowning achievement.