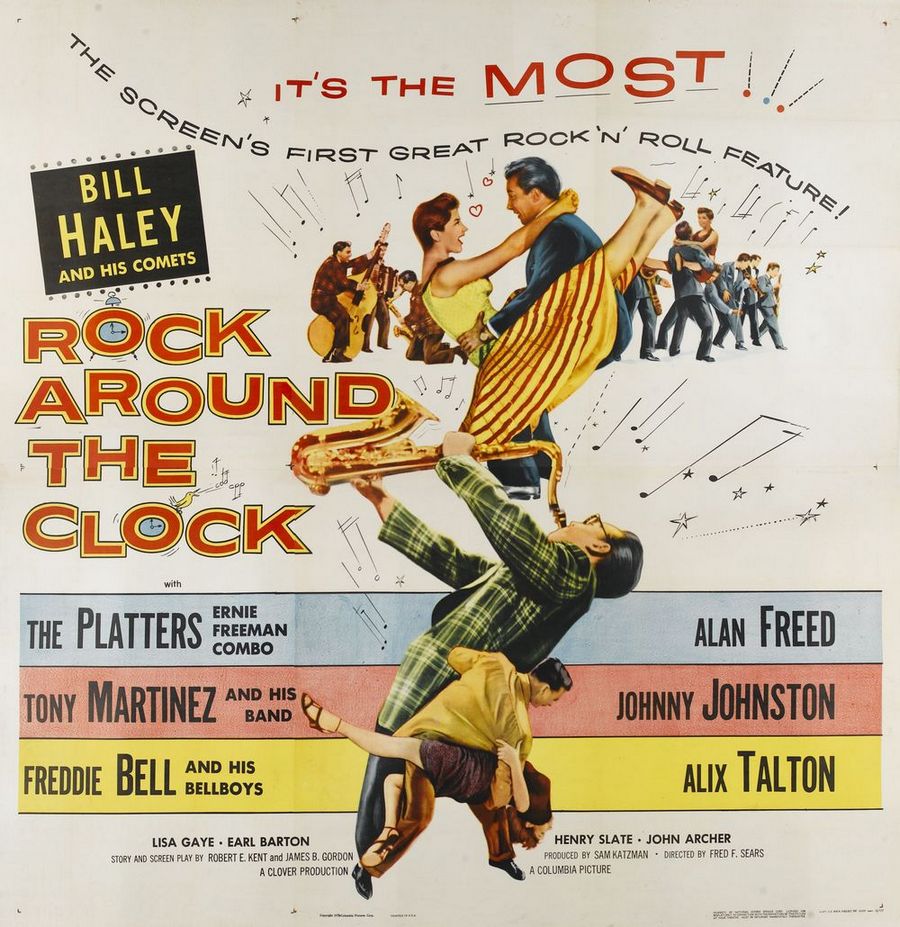 Black music, white actors. Hollywood had some catching up to do. “Rock Around the Clock” is noted as the first rock song to hit #1 on Billboard’s Hot 100. Source: TeachRock

Rock ‘n’ roll was the natural outcome of musical interactions between Black and white.

By the mid- 1950s, it was settled. Rock ‘n’ roll, the uniquely American hybrid of rhythm & blues (formerly “race music”), boogie-woogie, swing, and other forms of jazz, gospel, country & western, and traditional folk music, finally had a name, and the stars to do its bidding.

Cleveland disc jockey Alan Freed, whose Moondog radio show was the first to exclusively play rock ‘n’ roll, supposedly coined the term “rock and roll.” From his radio pulpit, Freed was perhaps the most effective proselytizer the genre has ever known. It was enough to put Freed in the inaugural class (1986) of the Rock and Roll Hall of Fame.

Bill Haley and his Comets

The nascent musical form was introduced to many Americans in 1955 through a major motion picture, The Blackboard Jungle. The movie’s theme song, “Rock Around the Clock,” was played by a very white Bill Haley and his Comets, who based their song on Big Joe Turner’s “Shake, Rattle and Roll” (which Haley covered…of course).

“Rock Around the Clock,” which was written in the 12-bar blues format, is recognized as the first rock song to top the pop charts. It stayed #1 for two months.

Here is a superb video that tells the story of “Rocket 88,” a candidate for the first-ever rock ‘n’ roll song, performed by Jackie Brenston and his Delta Cats, with great fifties photos, Bill Haley and his Comets, Elvis, Little Richard, Ike Turner, and more, published by Nathaniel Jordan via YouTube.

Rock ‘n’ roll was made viable by a very willing young audience bursting at the seams to break out of drab fifties conformity through the music they could call their own. In his 2017 tribute to the recently deceased Chuck Berry, Record contributor John Colgan Davis charted the transformation in American life that created nothing less than a cultural revolution.

The United States after World War II and the Korean War…gave us new developments in electronic technology such as jukeboxes, television and transistor radios.

The GI Bill gave returning veterans new financial leverage and options. Hundreds of cities and towns expanded and created “the suburbs” with shopping centers and new schools. Good jobs were plentiful and families now had money to spend on entertainment.

The baby boom created swarms of kids who were away at school for much of the day, away from adults. It was a new era. Teens could own their music: 45 rpm records were cheap and affordable, along with portable record players.

With teens having more time to themselves away from adults, they mingled at malt shops, pinball joints and other places to “hang out.” They had new places to take their own music with them. More and more of them drove cars and cars now had radios.

Radio stations sprouted in the mid-fifties and a new teen market was there to be tapped by advertisers. 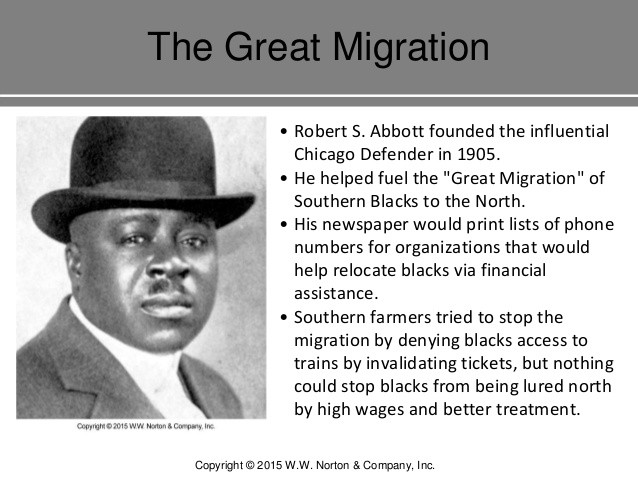 In the ’30s and ’40s, southern blacks were exhorted to leave their farms and move up North, especially to Chicago, to escape Jim Crow and crushing poverty. This momentous population shift was a key building block for interactions between Black and white musicians. Source cited.

Meanwhile in Memphis, Sun Records boss Sam Phillips said to anyone who was listening: “If I could find a white boy who could sing like a black man, I’d make a million dollars.” In 1955, Phillips produced a song for Elvis Presley titled, “Mystery Train,” written by a young Black singer and harmonica player named Herman “Junior” Parker. Phillips also produced the Presley hit, “That’s All Right (Mama),” written in 1946 by Arthur “Big Boy” Crudup, who was the first blues performer to land a record on Billboard’s “Race Records” chart.

Both songs have been designated at various times as the first rock ‘n’ roll records.

During that time, the Rhythm & Blues charts were dominated by Fats Domino, Bo Diddley, Little Richard, and especially Chuck Berry, whose fast shuffle guitar playing and clever two-minute ditties like “Maybelline” made him a popular act. By 1956, all of those artists had crossed over to the pop charts. It was a strong indication that rock ‘n’ roll was here to stay. 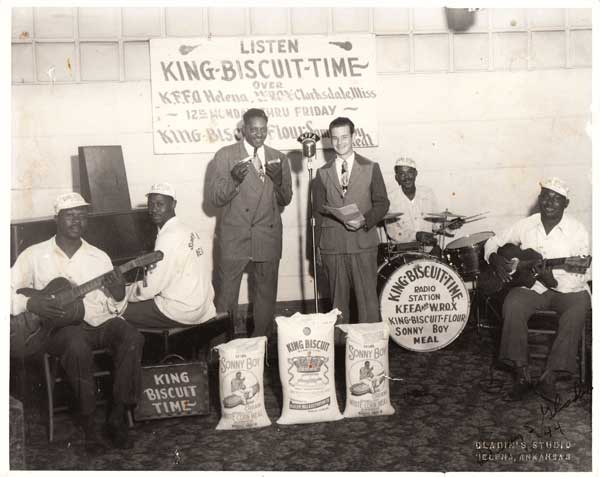 Selling biscuits and playing the blues at KFFA in Helena, AR. That’s Sonny Boy Williamson II (Rice Miller) at the mike with a blues harp in hand. Only the Mississippi River separates Helena, AR from the Mississippi “blues highway 61” delta. Source: Recordmecca

From Ballads to Boogie

The comingling of numerous musical genres mentioned above into what we call rock ‘n’ roll is a long story that’s beyond the scope of this article. Robert Palmer, the celebrated music journalist who died in 1997 of cancer at the age of 52, wrote a good summary statement for Rolling Stone:

[Rock ‘n’ roll’s] roots are a complex tangle. Bedrock black church music influenced the blues.  Rural blues influenced the white folk song and the Black popular music of the Northern ghettos, blues and Black pop influence jazz, and so on. But the single most important process was the influence of Black music on white. Rock might not have developed out of a self-contained Afro-American tradition, but it certainly would not have developed had there been no Afro-Americans.

The electric guitar is synonymous with rock ‘n’ roll. There’s a reason why the Hard Rock Cafe chooses to display a huge neon guitar outside of its restaurants. Depending on your background, thinking about the electric guitar could conjure up images of Jimmy Page or Eddie Van Halen pounding out a spine-tingling riff through a wall of amplifiers.

Chances are, the riff originated in some long-forgotten blues song. The electric guitar is a good example of white assimilation of Black musical expression. In the thirties, jazz and blues musicians began experimenting with the electric guitar. In 1939, Oklahoman Charlie Christian played electric guitar on a Benny Goodman recording. His sound immediately resonated. Robert Palmer: “His virtuoso, hornlike, single string lines and the deep, bluesy character of his playing set standards for jazz guitar playing that have never been superseded.

“But Christain was a former country bluesman. He performed with an older guitarist, Aaron “T-Bone” Walker…who invented modern blues, setting the style that almost all subsequent blues and rock guitarists would follow, from B.B. King through Eric Clapton.” 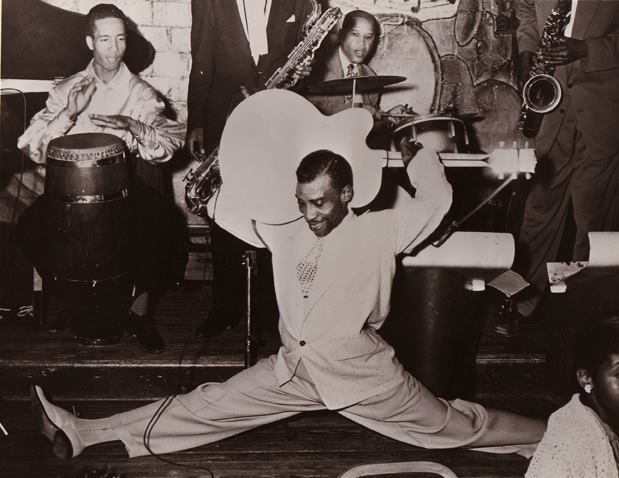 The Blues Hadda Baby and They Named It Rock ‘n’ Roll

While jazz guy Charlie Christian honed his style of “rapid runs,” T-Bone Walker harnessed the electricity in his guitar. Robert Palmer once more:

By using his amplifier’s volume control to sustain pitches, and combining this technique with string-bending and finger vibrato…Walker in effect invented a new instrument. He was able to reproduce…the convuluted cry of blues and gospel singers. In addition, he developed a chordal style on fast numbers, a pumping guitar shuffle which eventually led to the archetypal rock ‘n’ roll guitar style of Chuck Berry.