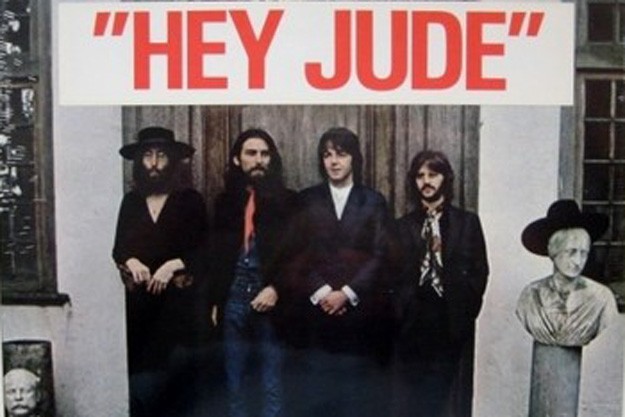 1968 marked the year when the Beatles topped the charts with a seven minute single, Hendrix exquisitely covered Bob Dylan and a doo-wop casualty captured the civil rights era. In a year of album-oriented rock, singles did quite all right.

(Released August 1968) “Hey Jude” was recorded during the making of the White Album, but Paul McCartney’s paean to John Lennon’s son Julian (Jude) was meant to be paired with “Revolution” for a double-A-side single. The song became the Beatles’ most successful single in America.

It took four days to record “Hey Jude.” Ever the perfectionist, producer George Martin had hired a total of 36 string and brass  instrumentalists to play the final refrain “over and over.” But it wasn’t the musical arrangement that made the song memorable.

Martin also asked the musicians to hand-clap and sing the backing vocals (na na na na na na na…hey Jude) for a powerful build-up for the finale. The fellows were happy to do it: they got double their fee.  And this vocal coda became the song’s signature.

I Heard It Through the Grapevine

(Released November 1968) With Motown on top of the world in the year 1968, all songs had to be approved for release by an actual quality control committee. Songwriters Norman Whitfield and Barrett Strong wrote “I Heard It Through the Grapevine” the year before, but the song went through an “uneasy gestation.” It was given to Smokey Robinson and then the Isley Brothers, but their versions were rejected by the committee, which met every Friday.

Marvin Gaye got a hold of it and he gave the song a “slower, spookier arrangement, built around voodoo drums…much more keeping with its lyrical theme.” (Listen to the video, above!) Unbelievably, Gaye’s version got a thumbs down. Finally, a version by Gladys Knight & the Pips was released. 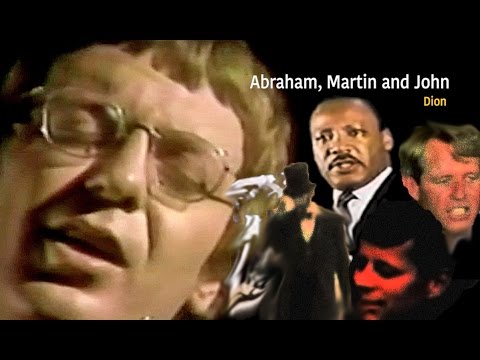 (Released October 1968) With the doo-wop sounding Dion & the Belmonts a distant memory and after years of suffering from heroin addiction, singer Dion DiMucci found redemption in his folksy hymn to Abraham Lincoln, Martin Luther King, Jr. and John F. Kennedy (Bobby Kennedy made an uncredited appearance).

It was the right song at the right time and place in history.

Here are Paul Simon and Art Garfunkel on stage in NYC’s Central Park, courtesy of Vevo and YouTube: 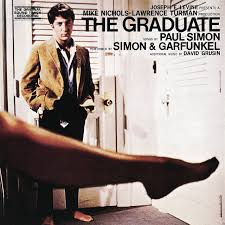 (Released April 1968) Popular music had invaded the movie industry in the years prior to The Graduate. The soundtrack for West Side Story enjoyed a 54 week reign atop of the Billboard charts. And how about all those Beatles and Elvis movies? Still, the idea of hiring “kids” who weren’t classically trained to provide mood-setting music for expensive movies was considered ludicrous.

Famed director Mike Nichols, working on a film called The Graduate, was a big fan of the folk/rock group Simon & Garfunkel. Nichols asked Columbia Records for permission to use certain S&G songs for his picture. They agreed.

As the film was nearing completion, something was clearly missing. Nichols had heard Paul Simon rehearsing a scrap of a song titled Mrs. Roosevelt. The former first lady  became the movie adulteress Mrs. Robinson and Nichols had his musical theme. (Only parts of the song made it to the final cut.)

Paul Simon, a big Mickey Mantle fan, suffered numerous inquires about the song’s iconic lyric, “Where Have You Gone, Joe DiMaggio?”.  During an intermission on The Dick Cavett Show, Simon was asked why DiMaggio was mentioned instead of Mantle, Simon said, “It’s about syllables, Dick. It’s about how many beats there are.”

All Along the Watchtower 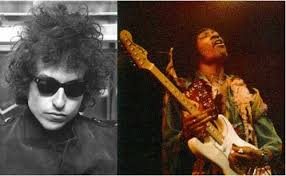 (Released September 1968) This is a sweet story of mutual admiration. Left-handed guitar whiz Jimi Hendrix, knocking around London before he became famous, would declared his admiration for Bob Dylan to anyone who would listen. Hendrix formed The Experience in London, released two chart-topping albums, and began recording his third album Electric Ladyland in January 1968 at the Olympic Studios in London.

Meanwhile, Bob Dylan returned to music after a motorcycle accident immobilized him for most of 1967. He began work on the album John Wesley Harding. A song titled “All Along the Watchtower” was recorded in November 1967. Hendrix got a hold of the tape and loved it. He would cover the song in Electric Ladyland.

Both versions of “All Along the Watchtower” were released in 1968. When Bob Dylan heard Hendrix’s version, he was “blown away…It overwhelmed me, really.”

To this day, Dylan performs the song closer to Hendrix’s version than his own original version. Dylan: “Strange how when I sing it, I always feel it’s a tribute to him in some kind of way.”

Fifty years ago today: What a great year for rock music. (What songs did I miss?)