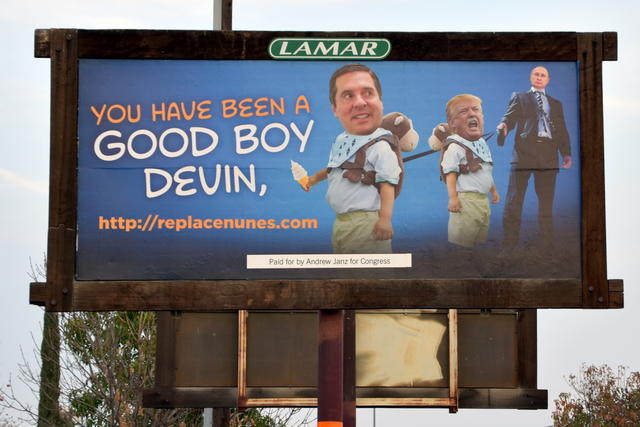 Rep. Devin Nunes (R-CA) hears it from the folks back home in Fresno. Source: dailykos.com

Like his mentor in the White House, California House Republican Nunes has some problems with the truth.

The truth is that they [Democrats] are covering up that Hillary Clinton colluded with the Russians to get dirt on Trump to feed it to the FBI to open up an investigation into the other campaign.

Imagine that!  We have a special counsel (a Republican) investigating Russian collusion in the 2016 election, and thus far, it has yielded two guilty pleas (Papadopoulos, Flynn) and two arrests (Manafort, Gates)… all four men associated with the Trump presidential campaign. But hell no, it must have been Hillary all along!

There is not a shred of evidence to support that claim of Devin Nunes, who chairs the House Intelligence Committee. It is a wild accusation, an utterance with no honor,  a stain on a committee of the US Congress and consistent with other Trump defenders who lie and lie and brazenly attempt to blame Democrats for their sins.

Eric Bauman, chair of the California Democratic Party, had this response:

This is an open declaration of war on the FBI and the rule of law. Nunes and Trump are lashing out like guilty men who know investigators are getting closer and closer to exposing their crimes.

The fact is, one instance of possible collusion with Russian players was made public by the president’s son. Donald Trump, Jr. turned over emails that revealed a June 2016 meeting in Trump Tower in which campaign manager Paul Manafort, Jared Kushner and Junior met with Russian intermediaries who offered “very high level and sensitive information” that could “incriminate Hillary” and is part of “Russia and its government’s support for Mr. Trump.”

Nunes Getting His 15 Minutes

Devin Nunes, of Portuguese stock (Azores), is a third-generation milk farmer in the rural valley surrounding Fresno. He was elected to the US House of Representatives in 2003. He is said to be closely allied with Speaker Paul Ryan.

Even as drought has ravaged the farmers of central California, Nunes has resisted pinning the cause on global warming, calling it “nonsense.” Nunes has choice words for environmentalists, calling them “followers of neo-Marxist, socialist, Maoist and Communist ideals.”

This rhetorical conservatism is music to the ears of the Trump administration (Nunes was on Trump’s transition team) and Devin Nunes has become the public face (or farce) of Republican attempts to undermine the special counsel’s probe by denying its legitimacy. 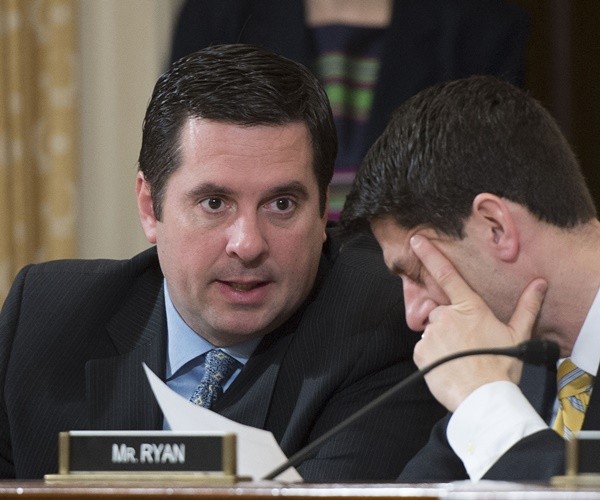 You’ve undoubtedly heard about the Nunes-authored memo that purportedly contained proof that the FBI conspired with Democrats to compromise the Trump campaign. Trump recently released the memo over the strenuous objections of the FBI, which said it made “material omissions of fact that fundamentally impact the memo’s accuracy.”

Already Republicans are arguing that the probe by special counsel Robert Mueller is “fruit of the poisonous tree” and therefore must be extinguished. Of course Donald Trump tweeted vindication.

There’s only one problem: The memo doesn’t support its main accusation. In fact, Nunes’ cherry-picked assertions and his conspiratorial trips to the White House have comically portrayed the congressman as, in the words of Senator Lindsey Graham (R-SC), “Inspector Clouseau.”

Does Anyone Really Care? 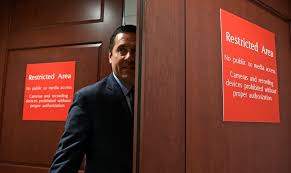 I am not going to waste our time probing the details of a memo that was never intended to be taken seriously. This episode, a huge waste of taxpayer money, was never an exercise in competing facts, ideas or narratives.

To the extent that Nunes has been able to engage the media in a debate over the memo’s contents, the California Republican has accomplished this: “To confuse the public, divert attention from the administration’s misdeeds and rile up the Republican base.”

Media Matters for America: “The result is a confused public that doesn’t quite know what’s going on, but has heard that the FBI might have done something wrong.”

The poisonous effect of this farcical tug-of-war has compelled Devin Nunes to take extraordinary measures to consolidate his power in service to his esteemed leader, Donald Trump: 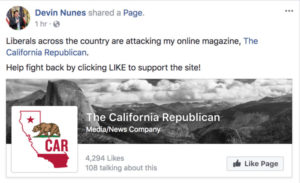 Nunes’ schemes and shenanigans, along with his “deer-in-the-headlights” mannerisms, have aroused several mainstream media outlets to portray the congressman a sort of laughingstock. To Nunes, this is “fake news.” Most right wingers label any news accounts not to their liking fake news.

So what better way to fight fake news than to have a fake news outlet all to yourself? Nunes recently created a campaign website that is masquerading as a serious journalistic enterprise: the very definition of fake news. In the accompanying image, Nunes describes it as an “online magazine.” 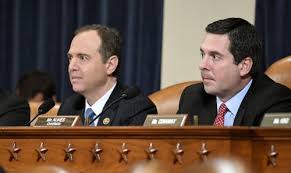 Nunes’ ham-handed control of the House Intelligence Committee has had a palpable effect. “The level of trust and the level of everything down there–it’s poison,” lamented Republican Rep. Tom Rooney of Florida. “It’s absolute poison down there.”

Devin Nunes touted a solution: CBS news reported that Nunes plans to build a wall, a literal wall, to separate Republican and Democratic staff members in the designated secure areas of the committee. The idea seems to have gotten bi-partisan ambivalence.

It’s a long-shot, but Nunes might face the fight of his life in the 2018 midterms.

Can we get rid of this guy in the upcoming midterm elections? It’ll be tough: Even as Californians roundly rejected Trump in the 2016 election, Nunes’ district gave Trump a 10 point edge. It is rated “Safe Republican” by all pollsters.

But Nunes’ antics might have given his district’s voters pause: A recent poll had Nunes up by just five points over a generic Democrat. The local Fresno Bee branded their congressman, “Trump’s Stooge.” Nunes’s opponent, Andrew Janz, hauled in $340,000 on the week the memo dropped.

Janz will need a lot more money to compete against an entrenched incumbent. Why don’t you Google ‘Andrew Janz’ to find out where and how to send him a little something.

What are you waiting for?