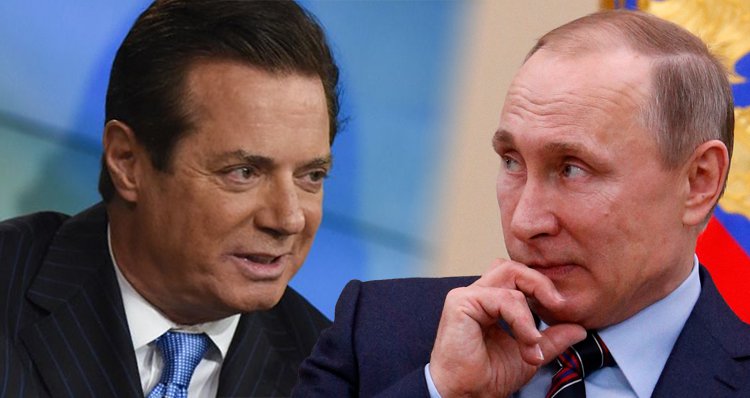 “Treason’s just another word for nothing left to lose…”

The Grim Reaper seems to be at the White House doorstep, but is he packing the elusive “smoking gun”?

Special prosecutor Robert H. Mueller III is unsealing indictments with dizzying speed, but with scarcely a leak of what’s to come.

Mueller’s tight ship has created a crippling fear of the unknown, with predictable responses. The White House remains in crisis mode, lashing out at the usual suspects of Democrats, Hillary, the media and law enforcement; everyone except for the one certifiable villain: Russia.

Republicans seem content to look the other way, waiting for that tipping point of when Donald Trump is no longer necessary to their political survival. History will not be kind to any of them. 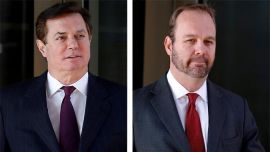 It didn’t make headlines at the time, but Donald Trump’s choice of campaign manager seemed like an odd choice. Paul Manafort didn’t have much campaign experience. He was a guy who spent much of his career propping up authoritarian regimes around the world.

At that time, Paul Manafort’s life was a mess (an affair uncovered) and he was deeply in debt: He owed as much as $17 million to Russian oligarchs, according to Cyprus bank records obtained by the New York Times.

It was a stark reversal for a man who, as early as 2005, worked secretly for Russian oligarch Oleg Deripaska, an incredibly wealthy man, a close Putin ally who was Putin’s constant traveling companion. According to the Associated Press, Manafort signed a $10 million contract with Deripaska in 2006 to lobby on behalf of the Russian government.

The Father of “Fake News”?

Incredibly, the very things that Russia is accused of doing to our recent election are precisely what Manafort signed on to do for the oligarch: “…influence politics, business dealings and news coverage inside the United States…to benefit Vladimir Putin’s government.”

Eventually, Manafort was paid even more millions working on behalf of a pro-Putin political party in the Ukraine.  He succeeded in getting Viktor Yanukovych–Putin’s boy–elected prime minister of Ukraine as a “pro-western democrat.”

The Ukrainian people were not fooled for long. In 2014, Yanukovych was deposed in a popular uprising, accused of treason, fled to Russia and Manafort was out of a job.

The $17 million that Deripaska and other oligarchs gave Manafort to start a cable TV station in the Ukraine went “poof.” Manafort sought salvation in the Trump campaign.

This is the man Donald Trump hired to be his campaign manager in March 2016. 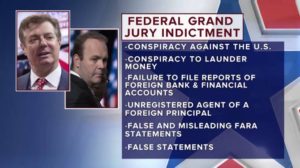 Last week, special prosecutor Mueller expanded the indictment against Manafort to include a grand total of 32 charges. In addition to charges listed in the above image, Manafort has to account for fraudulent loans and promises of favors that occurred during his tenure with the Trump campaign. (Manafort’s trial begins Sep. 17…two months before the midterm elections!)

The next day, Manafort associate and co-defendant Richard Gates agreed to plead guilty and to cooperate with Mueller’s probe. That can’t be good for Paul Manafort. 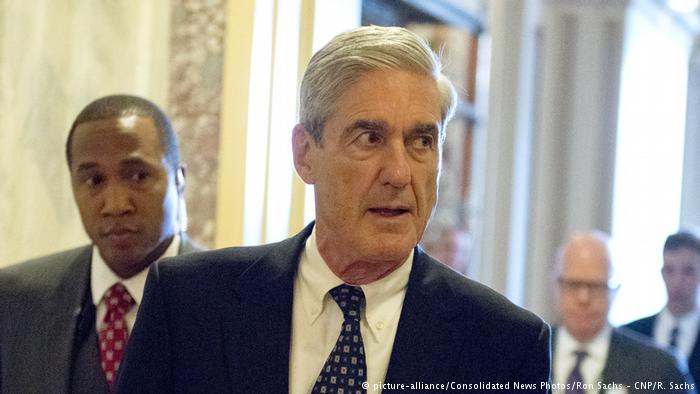 When Paul Manafort took over the Trump presidential campaign, he brought with him a whiff of the Kremlin to the Trump Tower:

First things first: Manafort’s crippling debt. Manafort sought to use his role as campaign chairman to patch things up with oligarch Deripaska, who thankfully was prohibited from entering the US because of his ties with “organized crime.” Manafort made inquires through a former comrade in Kiev. In July, according to yesterday’s New York Times, “Manafort offered to give Deripaska private briefings about the campaign.” 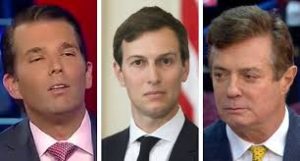 The now infamous June 9, 2016 meeting with Russian operatives in Trump Tower. It was Manafort, Jared Kushner and Donald Trump, Jr.  (“Junior” or “Fredo”) who met with the two Russians who promised “dirt” on Hillary Clinton. How can you read the email chain made public by Junior and not detect a collaborative effort to help one campaign and smear the other?

On June 20, 2016, Reuters asked then-press secretary Sean Spicer who was calling the shots in the Trump campaign. Spicer was unequivocal: “Paul’s in charge.”

The Republican convention platform reversed anti-Russia stance on Ukraine. When it comes to foreign policy, both major US political parties would naturally lean towards countries that aspire to be to be more western; to be “free.”

That is why it was so stunning to learn that the Trump campaign worked behind the scenes to include platform language depriving weapons to Ukrainian soldiers fighting Russian territorial encroachment. It contradicted the opinions of most Republican foreign policy experts, many of whom remained “cold warriors” who had fresh memories of Crimea.

Of course the Republican National Convention took place while Paul Manafort was chairman of the Trump campaign.

I don’t pretend to know how to connect the dots. But I’ll bet special prosecutor Mueller, with Richard Gates under his thumb, has a pretty good road map.