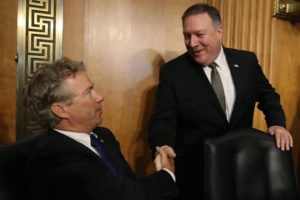 Libertarianism isn’t “cool”: Just isolationist conservatism. During the Iraq War, Rand’s father, Ron Paul, got a lot of mileage out of that.

No, millennials aren’t turning en masse into angry, selfish libertarian conservatives, as my headline perhaps implies. If anything, the opposite is happening, as social issues and the inevitable march of human progress pull millennials leftward. In the 2016 presidential election, Donald Trump captured only 37 percent of young voters.

But I still remember Ron Paul tents at Occupy encampments up and down the east coast. Republicans make stupid wars and people will follow an isolationist pied piper.

As important, opinion-makers on the left must keep a watchful eye on how a “highly individualistic culture” is emerging among some youth, “favoring the self over the group.” Libertarianism is about as close as you can get to cultural individualism in politics, as “individual rights” can be easily misplaced into conservative doctrine.

The point is, the battle for the hearts and minds of the youthful voter is hardly over. 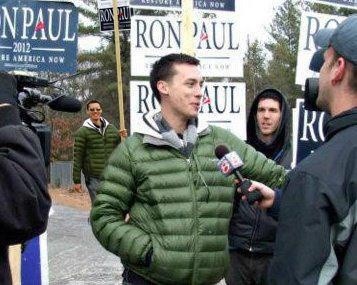 Ron Paul had a good run with millennials.

Soon after Rex Tillerson was sacked, Trump nominated CIA Director Mike Pompeo to be the next secretary of state. Pompeo is a former conservative Congressman from Kansas.

Defying Republican orthodoxy, libertarian Rand Paul vowed to do “whatever it takes” to stop Pompeo’s confirmation in the Senate. Paul asserted, “I don’t think you want people eager for war to run the State Department.” Rand called Pompeo “a wrong fit for America.” Strong words from a principled libertarian.

With 21 members on the Senate Foreign Relations Committee and all 10 Democrats opposed, Paul’s “no” vote would have summoned an historic first: The only nominee for secretary of state to get a thumbs down from committee.

Pompeo is on record as being a bitter critic of the 2015 nuclear accord with Iran, brokered by the primary world powers and  led by President Obama and Secretary of State John Kerry. The deal lifted sanctions on Iran in return for a pledge that Iran abandon its nuclear fuel enrichment program for 10 years. Most parties agree that Iran has been in compliance.

Trump has labeled the Iran deal “terrible,” but has never given a reason why. With Pompeo a kindred spirit, people expect Trump to drag America out of the deal…even if it means outraging our allies and stoking fears of a nuclear confrontation. 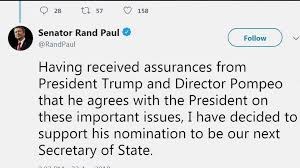 Suddenly, lo and behold on Apr. 23, the good doctor (ophthalmology) Rand Paul changed his mind and signaled his approval.

In a series of tweets (the last of which is above), Paul took Donald Trump at his word that Pompeo regretted his support for the Iraq War and no longer advocates “regime change.” (Those were Ron Paul’s issues.) And Rand Paul believed Donald Trump.

Cards on the table: Isn’t that a little like receiving assurances from a child that he won’t muss up his clothes again on the playground? How do you sacrifice your crowning distinctive trait…a principled politician… the hallmark of your brand, on the word of a novice who lies frequently and famously and whose top associates are all in trouble with the law? 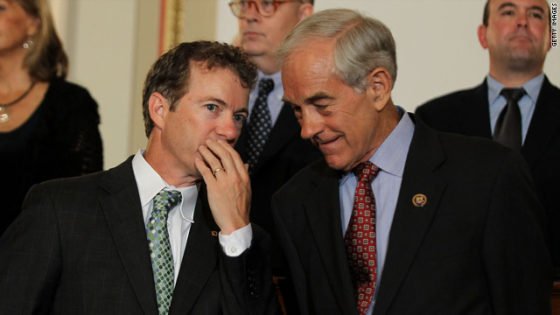 Come to think of it, Rand Paul is somewhat a novice himself. His first exposure to politics was at age 13, when his father was elected to Congress. Father Ron opened the doors to Rand’s conservative political activism. He became a regular speaker at Tea Party rallies, sometimes on behalf of his father.

In what could be called political serendipity, Rand Paul won his first campaign. In 2010, he was elected to the US Senate. It was during a time when his father had a lot of ‘splaining to do.

In the late 1980s and early 1990s, at a time when Ron Paul was in-between his thrice tenures in Congress, he published newsletters under many titles, such as Freedom Report, Survival Report and Investment Letter. Whatever their purpose was besides making money (The New Republic reported that Ron Paul made close to a million dollars in the publishing venture), there is no doubt that the newsletters contained thoroughly racist material, as you can read in the graphic below. When the Texas Monthly inquired about them in 1996, Ron Paul took responsibility for them, and slyly indicated that some statements were “taken out of context.” 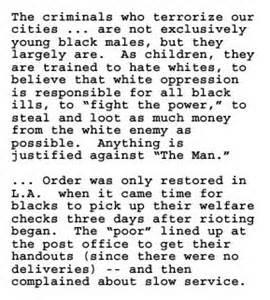 But when Ron Paul ran for president in 2008, he had a different story ready to go. Paul explained that he didn’t really write the offensive material, didn’t know who did and, in any case, they didn’t represent his views. But, according to an article that cited the Washington Post:

[People] close to Paul’s operations said he was deeply involved in the company that produced the [racist] newsletters…closely monitoring its operations, signing off on articles and speaking to staff members virtually every day. [A person said Paul aimed] to try to increase sales by making the newsletters more provocative. ‘It was playing on a growing racial tension, economic tension, fear of government,’ [the person said].

Expect to see Rand Paul again on the national state. Using criminal justice reform as a consensus issue, Rand is diligently cultivating milllennials by growing his mailing list and small donor base. You can see his supporters in the familiar Rand Paul t-shirts at your local college campus.

But fancy t-shirts can’t hide the fact that Paul still adheres to the conservative part of his libertarianism, which is unpopular with most American people. When you next visit a college campus, ask the question, Does Rand Paul support the Civil Rights Act of 1964?

If there is indeed an answer, it will be tortured and convoluted. Because he does not. You can look it up.