Ahmet Ertegun was ‘The Last Sultan’

A review of The Last Sultan by Robert Greenfield. 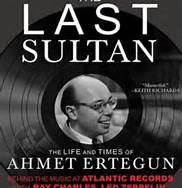 Robert Greenfield has done it again! The Last Sultan is the latest in a long line of biographical achievements for this veteran journalist and author, who’s profiled other counter-culture legends such as Jerry Garcia, Bill Graham and Timothy Leary.

Greenfield portrays Atlantic Records mogul Ahmet Ertegun as a magnetic yet indulgent man. Ertegun always seemed to be in the right place in the right time. He was a child of wealth and privilege as the son of a Turkish ambassador. A speaker of many languages and the recipient of an elite education, Ertegun could have followed his father into the diplomatic corps.  Instead, he parlayed his genuine love for jazz and rhythm & blues–“race music,” as it was called back then–into founding a franchise that would make him rich and famous, even beyond the standards of a pampered youth…a man who would never work a “real” job a day in his life. 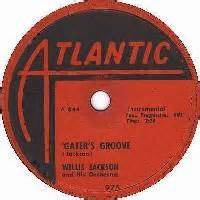 When Ertegun founded Atlantic in 1948, the world was ready for the kind of music the label offered. This was a transformational time: Jackie Robinson had broken the color barrier in baseball, jazz, a creature of Prohibition, would become America’s music, and black artists would slowly but surely follow Elvis Presley into the radio mainstream. (Greenfield contends that Atlantic almost bought Elvis’s contract from Sam Phillips at Sun Records, but was beaten to the punch by RCA Records…by a mere $10,000.)

Ertegun’s first big-time artist was the great Ray Charles, who headed Atlantic’s roster of up-and-coming R&B performers. Along with his partner Jerry Wexler, Ahmet was present in February, 1959, when Charles improvised a recording which would become the hit, “What’d I Say.” Greenfield:

Combining elements of jazz, gospel, and the call-and-response of Mississippi Delta field blues into a mind-blowing synthesis of filthy funk and non-stop driving rhythm, the track was unlike anything anyone had ever heard before, much less recorded.

“What’d I Say” spent 15 weeks on the pop charts. It sold over a million copies, making it Charles’s first gold record. But as Ray Charles’s contract was about to expire, he had bigger royalties, not Georgia, on his mind. Despite constant pleading and courting by Ertegun, Charles left Atlantic for ABC-Paramount…for a reported unheard-of  75-25% split in favor of the artist’s royalties.

Losing the Beatles and Selling Out

The loss of Charles would hurt Ahmet badly, especially in light of his remarkable track record with black artists. All of the great ones paid homage to Ertegun, who in turn loved them back and made them (and Ertegun) wealthy. (At an impromptu concert in London, the great Otis Redding greeted Ertegun by calling him “Omelet.” When Redding was privately corrected, he explained, Hey, I thought the dude was into omelets. Just like when a dude is into hamhocks, we call him “Hamhock.”)

There would be other missed opportunities. Notably, Atlantic became aware in 1964 that distribution of Beatles records in the US was up for grabs once Vee-Jay Records failed to pay royalties. The decision was left to Ertegun’s partner Jerry Wexler, whose profound love for jazz and blues perhaps caused him to disregard the significance of the “British Invasion” and long-haired rock music. Pronouncing the Beatles “derivative,” Wexler declined, and the distribution deal went to Capitol Records. To his dying day, Ertegun gently but firmly reminded Wexler of his Beatles moment.

In 1967 Atlantic was sold to Warner Bros. for an amount that Wexler described “as something of a joke.” Sensing another round of “payola” hearings in Congress, Ertegun went along. The trail-blazing mogul was having his doubts:

What the industry generally called the Atlantic Sound was eventually superseded by the Motown Sound, which was fabulous. It got me right away, and I didn’t know how to reproduce it and it scared the shit out of me…It was newer and hipper than what we were doing, and it got to the public in a very heavy way and became pop music.

Ertegun and Wexler retained their management positions, and made a decision: When in Rome… Atlantic would go after the long-haired white boys. 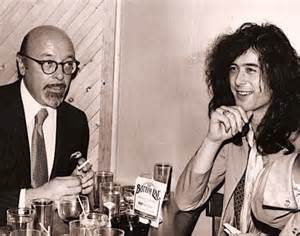 The Rolling Stones always regarded themselves as a blues-oriented band and admired the “Atlantic Sound” from afar. The Stones were far from wealthy due to unwise management deals with charlatans like Allen Klein, the man partially responsible for breaking up the Beatles. So when their contract with London Decca Records expired in 1970, it was Mick Jagger who courted Ahmet Ertegun. The two would become lifelong friends.

On April 1, 1971, the Stones signed a deal with Atlantic that would guarantee the band an advance of $1 million per record album for five albums and a royalty rate of over 10 percent a record. The Stones would have their own label–Rolling Stones Record (with the distinctive tongue)–and their own manager: Marshall Chess, son of the founders of the famous blues label Chess Records. For Jagger and his mates, it was a dream come true. 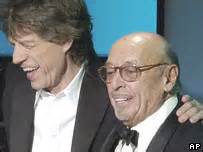 Other big rock acts would follow the Stones into the Atlantic fold: Cher, Led Zeppelin, Crosby Stills & Nash among others. Many of rock’s biggest musicians were in awe of this old-school record-maker. Robert Plant:

Right in the middle of the eye of the storm was this absolutely elite gentleman, the master of serenity, as much at home with the backstage cavorting of Led Zeppelin as he was with the politeness of high society. We had some memorable nights together; I wish I could remember them.

This guy could make wallpaper turn around and look at him. Every time he walked into a room, it didn’t matter who else was there…It was obvious that…this was a mighty, mighty presence.

On the other hand, sometimes the indulgent rich kid would appear out of nowhere, and supply industry wags with the latest Ertegun “indiscretion.” As fellow mogul David Geffen remembered, “Cher loved Ahmet. He used to grab her breasts [in public] and she would say, ‘Oh, Ahmet.’ He liked to do that.” 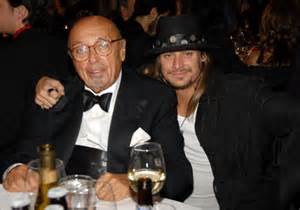 Before he died in 2006, Ahmet Ertegun placed his last big bet on a Detroit kid he would call his “young Elvis,” Robert James Ritchie, aka Kid Rock. Ertegun’s industry pull undoubtedly helped Kid Rock gain a Grammy nomination in 2000 for Best New Artist. With the benefit of hindsight, we are now certain that Kid Rock won’t even sniff the legacy and achievements of Elvis (Presley…or Costello, for that matter). Ertegun merely proved that even he can miss occasionally.

A year before he died, Ahmet Ertegun was asked how he would like to be remembered. His response: “I did a little bit to raise the dignity and recognition of the greatness of African-American music.”

Indeed he did. As the saying goes, the blues had a baby and they named it rock ‘n’ roll. If you believe that, this book ought to be on your list.