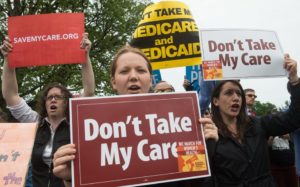 It could be prevented but for Donald Trump’s irrational, bigoted hatred for Barack Obama.

We see health care as the defining issue for the 2018 midterms. The Republican health care agenda is incredibly toxic with voters of every political persuasion.

New York state’s 19th Congressional district is nestled in the Hudson Valley, just north of the New York City metropolitan area and south of Albany. Moderation rules the district: It voted for Barack Obama in 2008 and 2012, and for Donald Trump in 2016.

Attorney and career state politician John Fasso is the 19th district’s first-term Congressman (Fasso beat progressive champion Zephyr Teachout).  As a moderate member of the Republican caucus, Fasso has run into a buzz-saw of tough votes that has unsettled his electoral prospects. Courtesy of HuffPost and YouTube:

What a Long, Strange Trip It’s Been

Ever since the Affordable Care Act (ACA) was enacted in March 2010, it has really been the defining issue of the Republican Party. It fueled the rise of the Tea Party. House Republicans voted to repeal Obamacare 67 times while Barack Obama was president, symbolic gestures that were simply a huge waste of taxpayer money. Republicans vowed to annihilate the evil edict when they gained a majority in Congress.

We all know how that went. The House passed a repeal bill (those “yes” votes will appear in numerous political ads this fall) and Paul Ryan and his minions paraded a foolish, beer-fueled victory lap around the White House lawn. But sensing a wall of opposition from every stakeholder in the health care industry plus hundreds of town halls and protests throughout the country, the Senate couldn’t even pass versions of a partial repeal. Sen. John McCain hammered the final nail…

As Congress fiddled, Trump burned with the knowledge that Obamacare–which Trump pronounced “dead” dozens of times– was still the law of the land. The White House unleashed an administrative crusade against the law: “slashing outreach budgets and pulling the law’s cost sharing reduction payments to insurers.”

Trump must have enjoyed sticking it to his predecessor, who has curiously become his public enemy number one. But in doing that, Trump created big problems for Republicans, who now “own” America’s health care. The cost sharing reductions are already harvesting a 20 percent premium hike.

Further, the Republican tax “reform” bill eliminated the individual mandate provision in the ACA. It is logical that including healthy people in a risk pool is crucial for keeping down costs. It is what insurance is all about. Insurers have groused that this will drive up premiums even more next year.

Here’s the payoff pitch for Democrats: The 2019 health insurance premiums are supposed to be announced in October…just a few weeks for the midterm elections. Absent federal funding to stabilize the health insurance markets, which is almost impossible to imagine, Democrats have a final argument to make before voters go to the polls.

Republican Senator Lamar Alexander of Tennessee (who’s done good bipartisan committee work for stabilization, to no avail)  can see the writing on the wall:

Rates will go up…There will be 11 million people who are between jobs, who are self-employed, who are working, who literally cannot afford insurance, and they’re not going to be very happy. And they’re going to blame every one of us [Republicans], and they should. 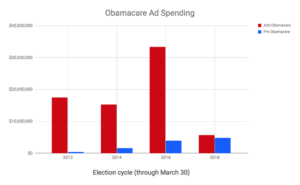 This is the first election cycle since its enactment that the majority of the public approves of the Affordable Care Act. “It’s an issue you don’t have to hide from anymore,” observed Mollyann Brodie of the Kaiser Family Foundation, which keeps track of these things.

Republicans have taken notice, as the above graph illustrates. “What are we going to say on it,” admitted a Republican consultant. “We’ll repeal Obamacare? I mean, what’s believable?” 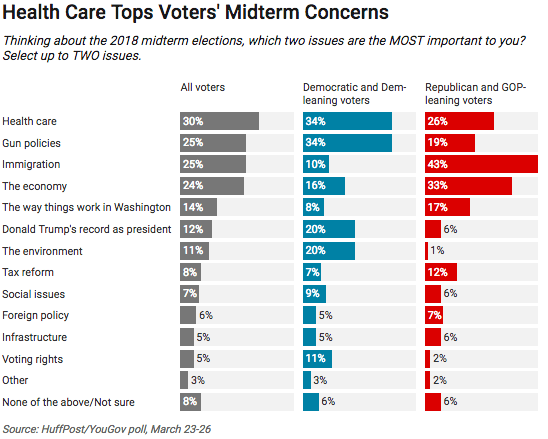 Health care remains at the top of the list for voters.

Lowering health care costs is the top issue for many voters, according to a poll commissioned by a pro-Trump group. So it’s certainly not surprising to hear Trump frequently mention his commitment to lowering the cost of prescription drugs. He emphasized it in his State of the Union address.

And how is he going to get that done? Medicare is prohibited by law from negotiating for lower drug prices, and this Republican Congress will keep it that way. Drug reimportation–allowing Americans to buy medicines manufactured in the US and sold cheaper in other countries–is also illegal and that suits Big Pharma just fine.

Trump will receive a call from a top pharmaceutical CEO and the matter will be forgotten.

Then Trump will do what he does best: Lie to the American people.