JT’s Bite of the Apple

(August 28, 2014) In the recovery business, moving to another location to escape a substance addiction is called a “geographic cure.” I’ve heard people say that it hardly ever works.

James Taylor, battling an addiction to heroin, was probably looking for that geographic cure when he moved to London in 1968. That, and a desire to succeed in the music business. The young man had a  lot to prove. He had come from a wealthy musical family: his mother was a “classically trained soprano” and his siblings–Livingston, Alex and Kate–were finding various degrees of success in popular music.

He made friends with musician Danny “Kootch” Kortchmar at age 15 and the two formed a band. However, JT’s musical progress was interrupted when, at 17, he committed himself into a mental institution in Massachusetts for treatment of depression. When he was released, according to Taylor, “I got involved in ‘junk.'” 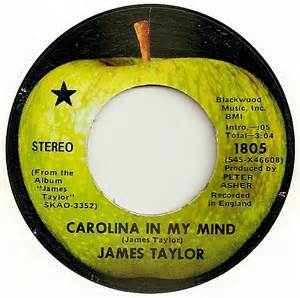 Taylor’s hit song was a remembrance of his time in rural North Carolina, where his father headed a medical school there.

When he arrived in London, Taylor’s friendship with “Kootch” was his ticket to audition for Peter Asher, of Peter & Gordon fame. Asher was then an A&R rep for the fledgling Beatles record label, Apple Records. While the Beatles were still under contract to EMI and Capitol Records, Apple Records had big plans to sign other artists. James Taylor would become the first non-British act to be signed by Apple. 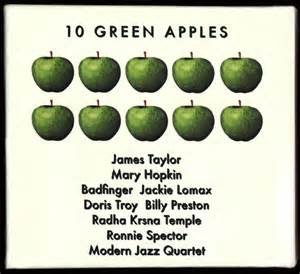 Apple Records had big plans to sign artists other than the Beatles.

From the liner notes in Taylor’s debut album, Asher remembers the audition:

I still remember my utter astonishment and delight. These were not traditional rock ‘n’ roll songs. They had elements of folk to them but with an R&B groove. The guitar parts had the elegance of classical Spanish guitar playing, but used occasional jazz chords. The vocals were intense and soulful but introspective and thoughtful at the same time. The songs were brilliant blends of poetic elegance, humor and precision. I was overwhelmed. 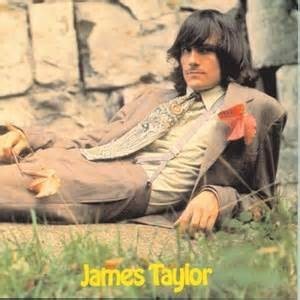 With Asher producing, the album was recorded from July to October 1968…at the same time The Beatles were recording The White Album. Many Beatles ironies abound: Paul McCartney played bass and back-up vocals on the album’s biggest hit, “Carolina In My Mind.” For the song “Something in the Way She Moves,” Taylor had wanted to title the song “I Feel Fine,” after a dominant line in the chorus. Well, that title was taken. And everyone knows the first line to the George Harrison song, “Something,” from The Beatles’ Abbey Road album.

The critical reaction to James Taylor’s first record was positive. Jon Landau gave it a rousing review in Rolling Stone. But JT’s Apple release didn’t sell as well as expected, in part due to Taylor’s hospitalization for drug addiction. In a January 1973 interview published by Rolling Stone, James Taylor had this to say about his junk obsession:

I kicked junk for about a half a year and then spent a while in Chapel Hill, North Carolina…I was clean. Then I started to take a lot of codeine. I went to Europe and started to take opium and then got into smack heavy for about nine months. I got into it real thick there. I came back to this country and kicked…

James Taylor’s tenure at Apple Records was doomed despite his drug addiction. Management changes at the label were in the wind. A bad guy who had already ripped off The Rolling Stones would reappear in the Beatles inner sanctum, and Taylor’s fate was sealed.

Allen Klein, then co-manager of The Rolling Stones, had tricked the band into signing over the copyrights of all Rolling Stones songs recorded before 1971. (A messy 17-year legal battle was won by Klein, which Keith Richards called “the price of an education.”) 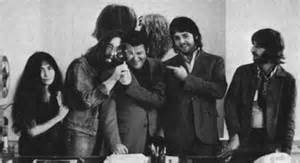 The Beatles strike a pose with Allen Klein, who would take over Apple Records and would become a key figure in the Beatles demise.

In 1969 Allen Klein became Apple’s president, “by virtue of his three-to-one support from the Beatles, Paul McCartney being the only group member to oppose his involvement.” McCartney’s subsequent withdrawal from Apple decision-making would give Klein free rein to purge the label of alleged antagonists. Peter Asher, the brother of Paul’s girlfriend, Jane, was let go. Taylor followed him out the door.

The rest, as they say…