Upcoming Midterm Elections: D’s Can’t Do Any Worse Than 2010

The clock is ticking on the 2014 midterm elections, a non-presidential election year in which the maneuvering is quieter but just as intense.

Nationally, party control of the Senate and the House of Representatives is at stake as usual. Because of retirements and the luck of the calendar, the Senate is a particularly critical battleground for Democrats. It’s no secret that Republicans agreed to a “clean” debt limit increase because they don’t want to stir the waters; they smell victory. We’ll see about that.

But judging by the map below, Democrats are swimming against the raging tide of midterm election history. One color dominated the outcome of the 2010 Congressional elections: 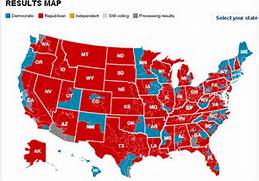 2010 midterm elections resulted in this sea of red.

So what else is at stake?

On another front, the eternally-divisive issue of abortion has taken center stage on the state level. As reported in the Huffington Post, at least 50 abortion clinics have closed across the country since 2010, the result of a wave of new state laws that subject abortion providers to impossible restrictions and mandates. In Texas, the state legislature voted to restrict access to abortion, and one blonde state senator gained notoriety by filibustering the proceedings. (She is now running for governor.)

In North Carolina, a state that went for President Obama in 2008, the newly-installed Republican legislature and governor have acted to allow concealed guns in bars and restaurants. More recently, a “save-the-gun” law breezed through the legislature: House passed it, 98-16; Senate, 48-1. It prohibits police from destroying or confiscating unclaimed firearms, a popular tool for law enforcement to keep guns off the street.

So what’s going on here? Is there a common thread weaving a new brand of fabric in American life? One thing’s for sure: This is not about Washington. Between the financially devastating government shutdown, wasted votes on repealing an established law and congressmen engaged in feeding red meat to their base (and reaping the donations) as opposed to compromising, Washington has shown little interest in governing.

Despite the bipartisan budget achievement recently crafted by Rep. Paul Ryan (R-WI) and Sen. Patty Murray (D-WA), the 113th Congress will go on record as the most unproductive national legislative body since Harry Truman was president.

Even the division of power among the branches of government fuels this dysfunction. We have a Democratic president, a Democratic Senate  and a Republican House of Representatives. (The Supreme court? Don’t get me started.) So, did the American people vote for divided government?

Consider that the Republicans maintained their majority in the House of Representatives despite the fact that, nationwide, Democratic House candidates combined to win around 1.4 million more votes  than Republican House candidates. (The final tally gave the Democrats the edge, 49%-48.2%.) The reason for that–redistricting–is deeply intertwined with issues around the new look of our state capitols. And those state capitols across the country is where the real political action is.

But how did it get that way? To answer that, we need to go back to the inauguration of this nation’s first African-American president.

In a book published last year titled, “Do Not Ask What Good We Do: Inside the US House of Representatives,” author Roger Draper chronicled a secret meeting on Inauguration Day, January 20, 2009, between top officials of the Republican party and conservative leaders. The entire meeting was devoted to devising ways of obstructing the newly-elected president’s legislative agenda.

Specific strategies were discussed about messaging and candidate recruitment. According to Draper, former Republican House Speaker and presidential candidate Newt Gingrich ended the meeting by saying, “You will remember this day. You’ll remember this as the day the seeds of 2012 were sown.” As you will see, Gingrich’s broken crystal ball was merely misdirected.

And then luck intervened for the Republicans. On January 21, 2010 the Supreme Court handed down its decision in Citizens United vs. FEC. It held that the first amendment of the constitution prohibited government from restricting political contributions from corporations. The decision simply “opened the spigot” for corporate and conservative donors. A wall had been breached.

Meanwhile, back at the ranch–the one belonging to billionaire right-wing industrialists Charles and David Koch (pronounced “Coke”)–preparations were ongoing for twice-annual meetings to unite conservative think tanks, lobbyists, foundations, media outlets, donors and political campaigns…to not only oppose President Obama’s initiatives, but to capture political power for Republicans who supported Koch’s doctrinaire libertarian philosophy. Eyes and ears were thus focused on the 2010 midterm election.

The oil and gas billionaires wrote big checks to various elements of the conservative empire. A new emphasis was given to consultants who specialized in generating grassroots movements, such as the Americans for Prosperity, founded and financed by David Koch.

That organization played a key role in organizing a loose federation of locally-based groups that came to be known as the “Tea Party.” The Tea Party  was certainly a factor in the 2010 election, where tables were turned, the euphoria of Obama’s achievement was slapped down, and Republicans emerged triumphant.

Americans woke up on Wednesday, November 3, 2010, to observe a stunning transfer of power. Republicans picked up more than 675 state legislative seats on election day 2010. Before the election, Democrats controlled 27 state legislatures (out of 50, of course), Republicans 14 and the remaining eight states were split between parties. After the 2010 election, Republicans ruled 26 state legislatures, Democrats 17 and seven were bi-partisan. Counting the governorship, Republicans gained total control of state government in 21 states. (That would increase to 24 after 2012.)

With so many state governments in the hands of Republicans, it was only a matter of time before the architects of this political sea-change would want to leave their collective footprint on state government. The conservative principles shared by all of the major players were theoretical and mainly articulated in advocacy publications and websites. How would these principles gain traction in state law? Enter the American Legislative Exchange Council (ALEC).

According to Wikipedia, ALEC “produces model legislation for state legislatures [that] promotes free markets, limited government, and federalism at the state level.” In the past, ALEC assisted state legislators in drafting “model policies” around issues such as reducing corporate regulation and taxation (allegedly its only focus now), requiring voter identification at polling places, minimizing environmental protections, and promoting gun rights, including the controversial “stand-your-ground” laws.

Since its founding in 1975 under the auspices of the American Conservative Union, ALEC currently counts as members over 2,000 state legislators in all 50 states…nearly one-third of all sitting legislators. ALEC and the Koch Brothers have deep and enduring bloodlines. Koch Industries has sat on its board for over 20 years. Koch Industries’ top lobbyist once served as ALEC’s chairman. In addition to their shared mission of codifying conservative principles, their relationship has provided tangible benefits to the privately-held oil and gas behemoth.

According to Koch Brother Exposed, a documentary by filmmaker Robert Greenwald, Koch Industries was named one of the 10 worst polluters in the country, and was in constant hot water over a number of pollution-related cases. One of the first bills George W. Bush signed into law when he was governor of Texas was an ALEC-modeled bill that gave companies immunity from state scrutiny if the company voluntarily informed regulators about their environmental violations. Dozens of ALEC bills are designed to minimize environmental regulations and resulting sanctions in ways that would obviously benefit Koch.

To the Victors Go the Boundaries

Of all the benefits accrued to Republicans in the aftermath of their ascendancy in the 2010 election, none had a longer-lasting effect than redistricting. Quite simply, the majority party gets to “draw the lines” every 10 years for legislative seats. Those lines remain binding for a full decade, no matter if or when the state legislature flips during that time. Ten years is a long time.

The redrawing of legislative districts, or “gerrymandering,” has a long and colorful history that goes back to 1812, when one Governor Elbridge Gerry of Massachusetts  redrew a state legislative boundary allegedly in the shape of a salamander. The majority party can get quite creative when it comes to shaping legislative districts to its party’s benefit. Take, for example, Ohio’s gerrymandered 9th Congressional District.

Before 2010 Republicans just controlled the Ohio Senate. In the election’s aftermath, the Ohio House flipped from 53-46 Democrat to 59-40 Republican. With Republican John Kasich (more about him later) beating the Democratic gubernatorial incumbent, the entire state government belonged to Ohio Republicans.

Along Ohio’s northern shore, two US House districts were overwhelmingly Democratic: The Toledo area was represented by Marcy Kaptur and the Cleveland area belonged to former mayor Dennis Kucinich. (Full disclosure: I used to work for Kucinich.) Declining population in this aging manufacturing corridor gave Ohio Republicans and opportunity of a lifetime. They combined two districts into one by basically drawing a borderline from Kaptur’s residence to Kucinich’s. AlterNet reporter Sarah Jaffe captured the scene.

It’s a Republican dream, forcing two progressive candidates to fight each other to stay in congress. That’s exactly what’s happening as redistricting has thrown Dennis Kucinich, two-time presidential candidate and hero to the anti-war movement into a competition with Marcy Kaptur, who’s made news…for fiery floor speeches calling for people under threat of foreclosure to be squatters in their own homes…

Kaptur won the primary against Kucinich, and was reelected with just token opposition from Republicans.

Today, even after the 2012 elections in which Democrats made slight gains in state governments, a total of 24 Republican governors have the luxury of working with GOP-controlled legislatures. Think of it: Almost half of our states are under one-party rule.

Obviously, this is painful for Democrats. But Republicans are not immune from the stress of hegemonic authority. There is a dichotomy between state legislators–safely insulated in their gerrymandered districts–and Republican governors, who face all of the voters and who therefore must pursue a more moderate course.

Let’s go back to Ohio (apologies to the Pretenders) and take as an example Republican Governor John R. Kasich. The son of a mailman who said he didn’t meet a Republican until he was a freshman at Ohio State University, Kasich fully embraced Republican limited-government priorities in his years as a congressman and his last three as governor. But, citing “Christian compassion,” Kasich recently defied his GOP legislature by using an obscure state board to expand Medicaid for 275,000 low-income Ohioans under the president’s health care law.

“I have an opportunity to do good, to lift people, and that’s what I’m going to do,” he said at the time. (At the same time, Ohio has refused to run its own state insurance exchange as encouraged under the Affordable Care Act.)

But let’s not feel too sorry for the Republicans. The website Politico pointed out that, out of the $1 billion President Obama spent on both his campaigns, it was the money that Democrats didn’t spend in 2010–a relatively paltry $20-30 million–that has come back to haunt the president in a big way.

The president’s signature achievement, the Affordable Care Act, has been slowed by Republican legislatures’ resistance to expanding Medicaid or setting up their own health care exchanges. The consequences of that are in the headlines every day.

So, the battlegrounds in our state capitols primarily had their origins with ALEC-instigated “model policies” passed into law by Republicans who were swept into office in the 2010 election. The sea-change that began on election night has been a “gift that keeps on giving” for Republicans, in terms of gridlock that has shut the door on President Obama’s policy initiatives, and given the American people GOP-dominated redistricting and a tidal wave of conservative state actions on union rights, abortion, gun control, voter suppression and inequality.

“A final displacement of national politics has been onto state government,” wrote former Labor Secretary Robert Reich. “[Republicans] would like nothing better than to stop the federal government from functioning. But…their efforts have only shifted power elsewhere in the system. What’s really gridlocked now is democracy,”