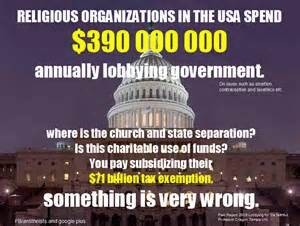 When a religion is good, I conceive it will support itself, and when it does not support itself…it’s a sign, I apprehend, of its being a bad one.

Two compelling narratives–the politicization of our churches and the ability of government to pay for itself–can be happily conjoined for the betterment of all. It’s time for organized religion to pay its fair share of taxes.

The amount of tax dollars gained by reversing churches’ permanent tax holiday could easily pay for President Obama’s “pre-school for all” initiative, for example, or fully fund for five years the Highway Trust Fund, which is being fecklessly debated in Congress as we speak.

The Philly Archbishop Dives Into Politics

In yesterday’s Philadelphia Inquirer, Archbishop Charles J. Chaput nodded his approval at the firing of a lesbian Catholic school teacher. “I’m very grateful,” the Philadelphia Archbishop told the Inquirer, “for taking the steps to ensure that the Catholic faith is presented in a way fully in accord with the teachings of the church. They’ve shown character and common sense.”

Intentionally or not, like it or not, the Archbishop has waded knee deep in what has become an explosive political issue. Suffice it to say Chaput has not heard the last of this. 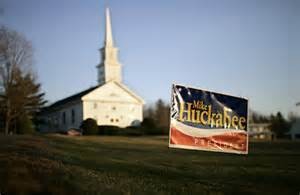 A church in Iowa

The very first stop on the road to a presidential nomination is in the state of Iowa. Being the first primary election in the nation, the Iowa Caucuses are said to be an “electoral crucible” for candidates. They are scheduled for February 1, 2016.

On the Republican side, it is essential for candidates to be favored by the “religious right.” This where Iowa’s churches come in. It is said that “local pastoral support is the key to success” in the Iowa vote. The pastors interviewed by the Associated Press didn’t bother to sugarcoat obvious violations of federal law.

“In our local county, we control the Republican Party pretty much–our church and another church,” said Bill Tvedt, pastor of the Oskaloosa Jubilee Family Church.

“Just being in Iowa and being involved opened certain doors,” explained Pastor Brad Sherman of the Solid Rock Christian Church. Those “opened doors” included an expense-paid trip to Israel with candidate Rand Paul (R-KY) and an excursion to London with former Arkansas Governor Mike Huckabee, who’s running again in 2016.

It’s against federal law for our spiritual leaders in the pulpit to endorse candidates for public office. It is up to the IRS to enforce these guidelines.

But the IRS, under blatant partisan attack for allegedly targeting conservative lobbying groups in determining tax-exempt status, is being fitted for a short leash. The US Congress put limitations on how the IRS can audit churches for tax code violations. The rule states that church tax inquiries can commence only if a “high-level Treasury official” gives the okay. Who needs all that paperwork?

This might explain why the tax agency has been mostly silent about “the increasingly aggressive political activity of US Catholic Bishops [whose] parish bulletins are being mobilized against the Obama administration’s healthcare regulations on contraceptives.” 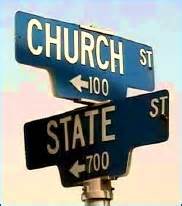 The “wall of separation” between church and state is the primary argument of those who don’t want churches to pay taxes.

The intellectual underpinning of the church tax-exempt movement, upheld by a cascade of court decisions, is perhaps best articulated by Erik Stanley, an attorney and Christian faith activist:

Taxing churches breaks down the healthy separation of church and state and leads to the destruction of the free exercise of religion.

This statement strongly suggests that there exists a coercive US government that actively seeks to crush religious liberty and the freedom to worship. There is no evidence to support this in modern day America. Even Muslims, reviled after 9-11, practice their religion openly. It’s a handy canard: religious freedom versus the heavy hand of government. It’s mythology. It’s not true.

Is this the same mythology that has transformed religious freedom into a “right” to discriminate against people whose lives somehow violate questionable biblical mandates? 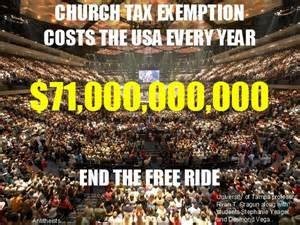 The $71 billion figure was crunched by Ryan T. Cragun, a sociologist at the University of Tampa, who calculated a “what if” figure: What if all church’s, synagogues, mosques, etc. lost all of their tax privileges. How much tax revenue would it generate? The figure does not include individual tax deductions for charitable giving ($39 billion, according to the CBO). Nor does it include local sales and property tax exemptions.

The local property tax exemption has some big city consequences. According to Reuters, “New York City’s 9,500 churches, synagogues and mosques, for example, will avoid $626.9 million in property taxes” in 2012. 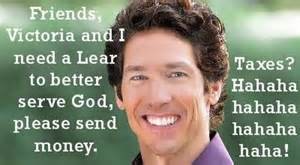 Who died and made this guy king?

In the Matter of Joel Osteen

Megachurch megastar Joel Osteen (no relation to ex-LA Dodgers pitcher Claude Osteen), he of the $10.5 million Houston home, he of the $40 mil net worth, whose 16,700-seat Lakewood Church was once an NBA arena …was victim of a burglary in March of last year.

It seems the thieves made off with $600,000 in currency, checks and credit card receipts. But it wasn’t the haul, impressive enough, that tickled cyberspace.

The $600,000 in cash was revealed to be the amount collected by Lakewood church on that weekend alone. And it didn’t include donations raised online or though the mail.

One weekend. Six hundred grand. Every cent of it, both giver and receiver, tax-free. it didn’t occur on the Cayman Islands. It happened right here in Houston, Texas, USA.