While California AG, Kamala Harris put the hammer on for-profit college scams like Trump U.

Amid the endless stream of lies, deceptions and bad faith gestures compiled by Donald Trump before and after his inauguration as president, Trump  U., which wasn’t even a licensed university, may serve as a classic example of how the man, our president, operates. 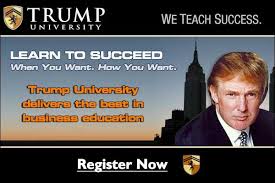 Create a brand with great fanfare with your name plastered all over it, make a lot of promises that can’t possibly be kept, reign in the suckers and take their money and deny any culpability when the project goes belly-up. Classic Trump.

When President Trump gives his State of the Union address tonight, it might serve as a bitter reminder to those who were talked into paying thousands of dollars to share real estate “secrets” with Trump that turned out to be, according to former Trump U. sales manager Ronald Schnackenberg, “a fraudulent scheme [that] preyed upon the elderly and uneducated to separate them from their money.”

With the walls closing in on Trump U., a lawsuit was filed by New York Attorney General Eric Scheiderman on behalf of 5,000 former students, charging Trump U. with “persistent fraudulent illegal and deceptive conduct.” Trump U. went out of business in 2011.

Trump denied the fraud claims, swore he would win at trial and even charged that federal judge Gonzalo Curiel couldn’t be partial because of his Mexican Heritage (Trump: “I’m the one building the wall.”). It turns out the judge was born in Indiana. Trump settled for $25 million.

In conjunction with the lawsuit and settlement, Judge Curiel ordered the release of 400 pages of documents that hung a lantern on very questionable Trump U. recruitment practices. Called “the playbook,” documents reveal that Trump U. recruiters turned a deaf ear to pleas of poverty and encouraged prospective students to tap into their retirement accounts and “max out” their credit cards.

In one particularly audacious passage that sought to reach deeper into a prospect’s pockets, recruiters were taught:

When the client’s credit card availability is $5,000 or less, have them pull all their [credit card] statements so we can see exactly what interest rates are being charged. Maybe we can save them some money.

For-profit schools’ primary aim is to maximize profits for its shareholders. On the one hand, for-profits are helpful to mainly older students who for whatever reason were denied a path to traditional higher education, and rely on the flexible class hours and online courses that for-profits provide. Good for them.

But this business efficiency hubris is really besides the point. For-profit colleges couldn’t exist without the federal government, which provides up to 90 percent of their students’ tuition through grants and loans. 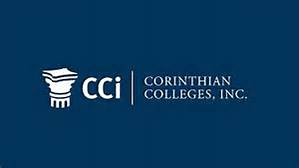 Negative reports about for-profit colleges have taken center stage lately. Perhaps spurred on by high-profile busts like the Trump U. boondoggle, for-profit students are beginning to express outrage over being lured into “degree” programs that plunge them deeply into debt without securing any financial well-being–a job–that was promised to them.

According to The Atlantic, the federal government was compelled to forgive over $27 million in debt accrued by over 35,000 students who were enticed by the same kind of “playbook” that the Trump swindlers employed.

In 2016, a California Superior Court judge ruled that Corinthian was basically a fraudulent operation, and ordered it to pay $1.1 billion in restitution and civil judgments. Approximately 20 state attorneys general were investigating Corinthian. One of them, California’a Kamala Harris, is now a US Senator and has announced a run for president. 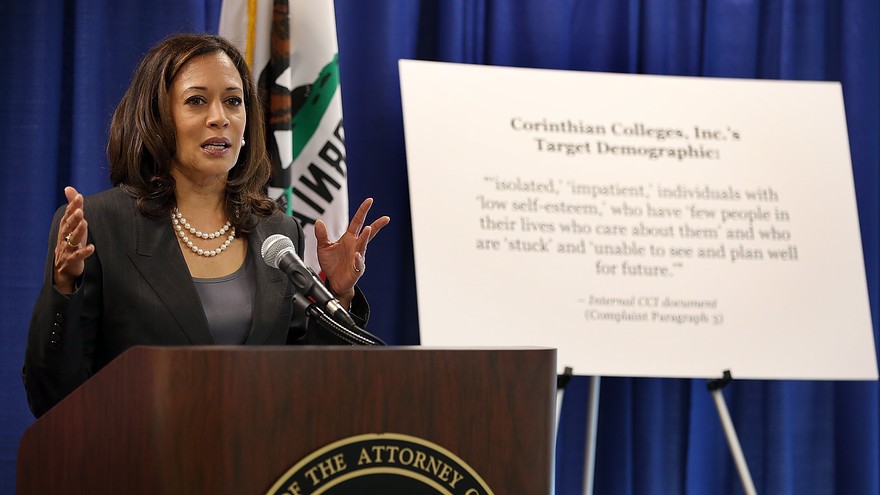 Corinthian’s recruiting practices would make a mob boss smile wistfully. According to court records, the school would recruit homeless people and entice them with federal loans that all parties knew wouldn’t get paid back.

The for-profit was also charged with pressuring students to borrow from a bank to which Corinthian had secret ties. When loans weren’t paid, students were embarrassingly pulled out of class or barred from campus.

When Harris was elected Senator, she joined Senate Democrats in introducing the Students Before Profits Act, a bill designed to protect students from deceptive practices in the for-profit sector.

It is clear that this administration believes a quality education is a privilege, not a right, so we must fight to protect our students from deceptive practices.