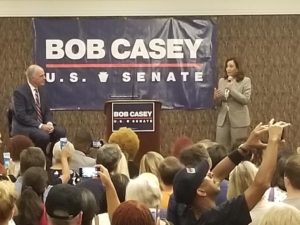 According to the Casey campaign, it was all routine. Just two Senate colleagues boarding an Amtrak train in DC on Friday, July 13, and traveling to Philadelphia to rally support for Bob Casey’s reelection to a third six-year term in the US Senate.

“It’s to emphasize the importance of Pennsylvania in the 2018 midterms,” Max Steele, communications director, told me. “They have a good working relationship in the Senate.”

Even though Casey’s ahead, with some polls tallying a double-digit lead, complacency is not an option in these urgent political times. Turn-out is crucial in a fertile environment such as Philadelphia. 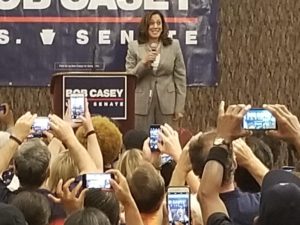 It’s especially advantageous to share the podium with a newly elected Senator with the story and charisma to satisfy the depiction of “star power.” An Oakland, CA, native, Sen. Harris is the daughter of two immigrants who came to this country with nothing and achieved the American Dream.  Her mother emigrated from Madras, India, and became a breast cancer researcher; her Jamaican-born father teaches economics at Stanford University.

A lawyer by trade, Kamala distinguished herself as California’s attorney general by shutting down or sanctioning predatory for-profit “colleges,” such as Trump U. and the infamous Corinthian College. I wrote about it here.

Sen. Harris is in most conversations about the top contenders for the 2020 Democratic presidential nominee. She has publicly stated that she “is not ruling it out.”

Hold on a minute. Haven’t we been here before? 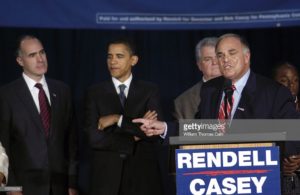 Deja Vu All Over Again

I still have my ticket to the political rally that occurred at Temple University’s McGonigle Hall in Philadelphia on October 12, 2006. It was less than a month before election day, and Democrats had been handed to them gifts like George W. Bush’s failed Iraq war, Katrina and a cluster of misdeeds involving Republican politicians. We all smelled blood in the water.

The rally’s big  attraction was Gov. Ed Rendell, formerly the rock star-popular Philadelphia mayor, who was running for reelection. Also occupying the stage was PA Treasurer Bob Casey, Jr., whose father was once Pennsylvania’s governor. Casey’s first run for the Senate would require him to topple the despised sweater-wearing social conservative Rick Santorum. Polls showed Casey comfortably ahead. We were hopeful.

An unfamiliar face was scheduled to give the final speech. He was a tall black man with a commanding presence. No one seemed to know much about him except he was the new senator from Illinois. He had a funny sounding name: Barack Obama. Conjecture about this guy running for president was met with disbelief or laughter. A black man winning the presidency. Yeah, right.

I don’t remember much about the speech except for the man giving it. He spun a powerful message of hope and optimism for the future. He had remarkable humility and a sense of decency. I remember thinking to myself, this is more than a slick suit. This guy has substance.

This was my first impression of Sen. Barack Obama. The future president. 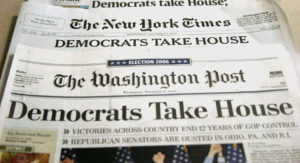 The last Democratic midterm “wave” election indeed happened 12 years ago, in 2006. The Democratic Party won a majority of governorships and flipped both the US House of Representative and Senate for the first time since 1994 (yes, also a 12-year span).

In the House, the final tally had Democrats cruising to a 233-202 margin. The Senate went to the Democrats by 51-49, with two independents (Sanders, Lieberman) caucusing with the majority. Of course Nancy Pelosi became the first woman speaker of the House. 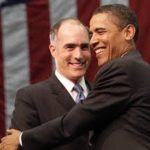 Bob Casey went on to crush Rick Santorum by 59-41 percent, the largest margin of victory for a Democratic nominee in the commonwealth’s history.

In March 2008, as most senators sided with Sen. Hillary Clinton, Bob Casey raised some eyebrows by endorsing insurgent candidate Sen. Barack Obama. At the time, Clinton was ahead of Obama by 12 percentage points in the polls.

Casey was said to be listening attentively to his four daughters, who made a persuasive case of Obama’s ability “to light up the younger generation.”

I wonder who Casey is listening to this time around?