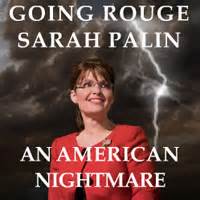 Take a walk through your favorite book store, turn left or right to the section probably called Current Events, and you can see them: numerous volumes by well-known conservative authors, with covers adorned with the garish tag, “New York Times Best Seller.” How will you recognize the conservative ones? McKay Coppins of the website BuzzFeed tells us:

[You] will recognize the subgenre by its uniform covers: the patriotic color scheme, the besuited politician striking a square-shouldered pose, the author’s name and title stamped across the dust jacket in imposing, all-caps lettering. Inside, the books follow a well-worn formula, lacing lofty talking points and vaguely drawn policy proposals with a sanitized personal narrative that reads as though it has been vetted by a thousand political operatives and stripped down to a fourth-grade reading level.

Copy that. But “best-seller” must mean that a whole lot of people are reading these books. Right?

Right-wing talker Mark Levin, who just recently called Secretary of State John Kerry a “jackass” on his syndicated radio show, wrote a book a few years ago titled Liberty or Tyranny: A Conservative Manifesto. According to Levin’s website, the book was a massive success: an “acclaimed #1 New York Times best-seller for an astounding 12 weeks.” (Amazing, astonishing, stunning, staggering and breath-taking were all left on the table, but who’s keeping score?) Anyway, the claim is impressive.

Well, maybe not. It was revealed last January that a group called the Senate Conservatives Fund (SCF) purchased in bulk copies of Levin’s book to the tune of $427,000. It seems that the SCF’s mission was to support far-right tea party candidates who were running against “establishment” Republicans. Levin was a vocal supporter of the same sort of fringe candidates. A probable act of quid pro quo was enough to tilt the sacred Times best-seller list, and give one brash right-winger a valid talking point.

The question is, how frequently does this happen? Is it standard operating procedure, or are these merely anecdotal, cherry-picked instances? Alex Pareene of the online publication Salon has an opinion:

Conservative books have also benefited from a well-oiled promotional machine that frequently includes bulk sales and “book clubs.” That machinery still exists, and still helps prop up books that couldn’t otherwise survive in the supposed marketplace of ideas.

What is a Best-Seller?

It is important to note right here that being designated a “best-seller” does not necessarily mean the retail sale of a certain number of books. According to a correspondent in Daily Kos, the list is determined by a combination of book editors’ projection of how well the book will sell, the amount of advertising the book receives and the tallying of sales of “a representative sample of bookstores across the nation.”

All of these factors become data fed into a computer, which in turn ordains a book’s best-seller status. This hard-won status replicates itself: “Once a book gets a ‘best-seller’ designation, it goes right into prominent placement, as book sellers scramble to take advantage of the notice it’s been given.” Thus, a best-seller list is much like an opinion poll:

The bottom line is this: a book does not need to be a well-written book, or factually accurate, or even genuinely popular, to make it on the “best-seller” list. All it has to do is demonstrate the “right” pattern of advance sales and purchases in the “representative sample” [of] stores used by the industry to measure these things.

There’s [sic] simply too many ways the system can be gamed to get specific books to place prominently on these lists, regardless of their true quality, or their genuine public appeal. 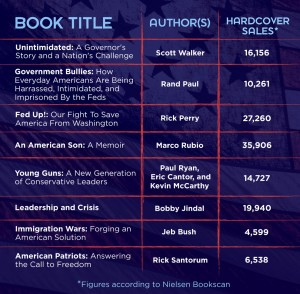 As the above graphic reveals, the conservative book business has seen better days. The BuzFeed article recounts the early days before 2003 when mainstream publishers began “elevating” conservative authors, who in turn celebrated their newly-won prominent status among the hated “liberal elites…and work to reverse the tide of the culture wars.” So what slowed the march?

Over the next 10 years, corporate publishers launched a half-dozen imprints devoted entirely to…selling books by right-leaning authors… [But] many of the same conservatives who cheered this strategy at the start now complain that it has isolated their movement’s writers from the mainstream marketplace of ideas.

That’s a good point, but there’re other factors in play. In my view, conservative books, as well as their counterpart magazines and websites, will always be compromised by their unique approach to factual content. In a previous post on this website titled in part, “The Liberal Media Are Dead…,” author Eric Alterman delivers a succinct assessment of the right wing’s difficulty with truth-telling. For me, no there is no better example of this than the book Liberal Fascism? by Jonah Goldberg.

Like most of his conservative brethren, Goldberg has endured his share of name-calling: “Ever since I joined the public conversation as a conservative writer,” Goldberg laments, “I’ve been called a fascist and a Nazi by smug, liberal know-nothings…” Fair enough. As a liberal, I plead guilty to rare instances of similar unbecoming verbosity.

It’s just that Goldberg has concocted his revenge in the form of fallacious, almost delusional “scholarship.” In other words, the book “is a howl of rage disguised as intellectual history.”

At the core of Goldberg’s conspiracy theory is his contention that fascism developed with the advent of Nazism and their political party, The National Socialist German Workers Party. The emphasis is mine. Don’t you get it? The Nazis saw fit to include the word “socialist” in its party name. Something must be going on here!

But instead of giving us a reason why (historical misdirection), Goldberg employs an almost-comical leap of faith by linking fascists and liberals (all liberals are socialists, dummy!) as partners in history. Just like that. Woodrow Wilson: the 20th century’s “first fascist dictator.” FDR, JFK, Bill and Hillary Clinton…fascists all! Maybe we’ll get the evidence in his next book.

The book Liberal Fascism?, published in January, 2008, “reached #1 on the New York Times best-seller list in its seventh week.” It says so right on Goldberg’s Wikipedia page. So who am I to question the accuracy of this claim?