Impeachment Quagmire: Trading a Bad Liar for a Good One 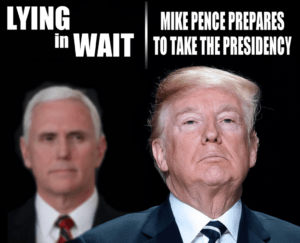 Short of a Mueller smoking gun, Mike Pence takes impeachment off the table.

There’s no better summary of the Trump presidency than when the president began his address to the United Nations General Assembly Tuesday, and claimed that his administration has accomplished more than any in US history. From MSNBC and YouTube:

The laughter among world leaders was palpable and unmistakable. Not a moment to be proud to be an American.

Donald Trump and his minions have been such a disaster to this country in so many significant ways that a cry for impeachment is reflexive, like, say, breathing.

We’re not alone in that appraisal. According to a Washington Post/ABC News poll, nearly half of all Americans (49%) support opening impeachment proceedings against this president. An even larger number–63%–support the Justice Department’s and Robert Mueller’s investigation into Russian meddling in the 2016 election. Fifty-nine percent have little or no trust in Trump’s denial of collusion. 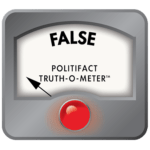 The Democrats propose “a government-controlled health care plan that will deprive 120 million Americans of their current health care coverage.” –May 19, 2009

So why is Democratic impeachment chatter down to a whisper? There are three good reasons. One, barring an explosive Mueller revelation, you’d be hard-pressed to find 67 US Senators voting to convict Pence in an impeachment trial.

Two, Democratic leadership is urging House candidates to not give demoralized Republicans a reason to go to the polls this election day. The party in power always loses Congressional seats in the midterms, and presidential approval numbers are such that this could very well be a “wave” election. 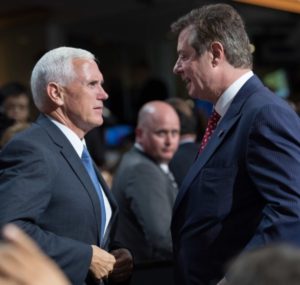 The third reason has to do with that slick-talking white-haired guy always standing behind the president with a spacy smile pasted on his face.

When he was Indiana’s governor, Mike Pence signed a bill in 2015 that allowed individuals and businesses to refuse service to LGBT customers…all in the name of “religious liberty.” The outcry was severe.  Even the NCAA sent word that it would have second thoughts of holding future tournaments in Indianapolis. That prompted the Indianapolis daily newspaper to devote its front page to a message to the governor: 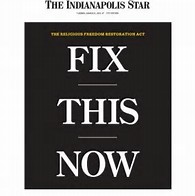 Mike Pence resigned soon after to become Trump’s straight man. It was obviously a strategic move towards securing the support of the evangelical right. Mike Pence was presented as “reasonable,” a bridge to the establishment; the adult in the room. They have so far succeeded.

Anybody who is familiar with historical data from the IRS know that raising income tax rates will actually reduce federal revenues. –November 9, 2010

Thomas Jefferson said, ‘Government that governs least governs best.’ September 21, 2017 (It was Henry David Thoreau who said approximately that in an 1849 essay.)

Mike Pence’s devotion to Christian conservatism is, if nothing else, consistent. His ideological journey is brilliantly dissected by writer Jeremy Scahill in the online publication The Intercept:

The enemy, to them, is secularism. They want a God-led government. That’s the only legitimate government.

Whatever becomes of Donald Trump (who may not run in 2020, whatever Mueller finds), Mike Pence will work with Congress to attempt to enact an extreme right-wing agenda. As the article in The Intercept asserts, “Trump is a Trojan Horse for a cabal of zealots who have long craved for an extremist Christian theocracy, and Pence is one of its most prized warriors…The radical religious right doesn’t need to save Trump’s soul.” 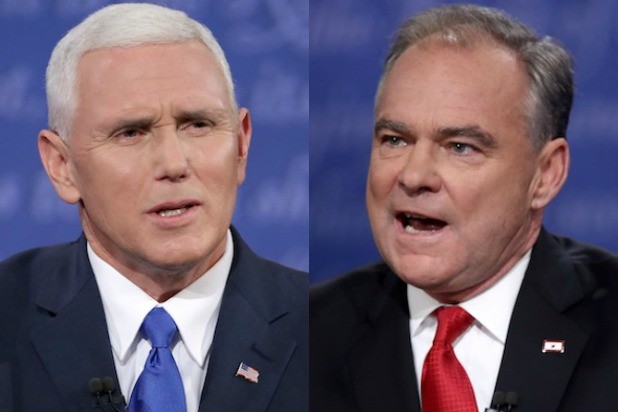 Americans caught a first glimpse of Mike Pence’s propensity to lie through his teeth during the vice presidential debate on October 4, 2016. Democratic candidate Tim Kaine of Virginia came out firing with question after question about Pence’s and Donald Trump’s glaring deceptions during the campaign.

You probably saw it: Pence sat there stone-faced, looking a bit bewildered and managed a wry smile as he fouled the air with his denials, even though each falsehood was part of the public record.

Pence repeated the laughable assertion that Donald Trump would release his tax returns “when the audit is over.” He insisted that Trump had not praised Russian president Vladimir Putin, when numerous statements indicated otherwise.

Trump contended that women should be punished for having abortions.
Kaine: Why did Donald Trump say that?
Pence: We just never would. (October 4, 2016)

Kaine: [Trump] was on TV awhile back, and he said, ‘I guarantee you this, Russia is not going into the Ukraine. He had to be reminded that Russia had invaded the Crimea two years before.
Pence: He knew that. (October 4, 2016)

Let’s focus on winning back one or both houses of Congress in the upcoming midterm elections. It’s best to deal with these things with some power in Washington.