A Partisan Warrior on the Supreme Court?

Here is the infamous “crying” video of Brett Kavanaugh at his confirmation hearings, in which he blames a left-wing conspiracy and the Clintons for having to answer allegations of sexual assault. The video is just over two minutes and for some reason, you can only start and stop it at the center. Courtesy of The Guardian and YouTube:

The politicization of the Supreme Court is corrosive to our democracy.

Sexual assault allegations aside (let the FBI do its work), a most consequential statement was made at the confirmation hearings by the nominee. Here are the pertinent words from the video, above:

The whole two-week effort has been a calculated and orchestrated political hit, fueled with the apparent pent-up anger about President Trump and the 2016 election…revenge on behalf of the Clintons and the millions of dollars in money from outside left-wing opposition groups.

This was a far cry from Chief Justice John Roberts’ 2005 confirmation statement that “my job is to call balls and strikes and not to pitch or bat.”

Kavanaugh’s remarks were both unprecedented by their naked partisanship and instructive in how much more the Supreme Court can be absorbed by ideology. But Kavanaugh did more than just reveal his conservative faith. He picked up a bat and a ball and took the playing field as a member of a team.

This can’t be good for the Supreme Court, an institution that’s seen its prestige and authority weakened by the partisan divide and a host of 5-4 decisions. Declining institutions, especially  one as important as the third gear of our government, is corrosive for American democracy. I truly believe President Trump delights in that. 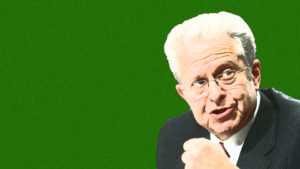 His [Kavanaugh’s] intemperate attacks on members of the Senate Judiciary Committee and his partisan tirades against what he derided as liberal political enemies…do more than simply display a strikingly injudicious temperament. They disqualify him from participating in a wide range of cases that come before the Supreme court: cases involving individual and groups that Kavanaugh has singled out…groups like Planned Parenthood or the American Civil liberties Union.

Members of the Judiciary Committee have asked Kavanaugh to commit in advance to recuse himself in such cases. Predictably, Kavanaugh has declined. 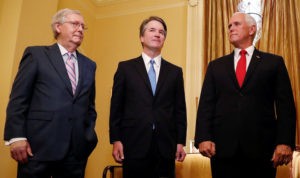 If you were, say, a high-ranking Republican official looking for a loyal person to head up your opposition research team, you probably couldn’t do better than Brett Kavanaugh. Here’s a brief view of his resume, from Wiki:

When Brett Kavanaugh was nominated to the DC Circuit Court, it took him three years to be seated, mainly due to enough Senators accusing him of being “too partisan.” This was when Sen. Richard Durbin (D-IL) called Kavanaugh “the Forrest Gump of Republican politics.” It didn’t help when the American Bar Association downgraded Kavanaugh from “well qualified” to only “qualified.” But he got his seat.

I can’t help but speculate that Chief Justice John Roberts can’t be pleased with Trump’s pick or the confirmation hearings. Yes, Roberts is a conservative, but he was also the fifth vote that saved the Affordable Care Act (Obamacare). In an interview with The New Republic, Roberts claimed that SCOTUS is losing institutional legitimacy because there are too many rulings along partisan lines. Roberts:

I think judicial temperament is a willingness to step back from your own committed views…and evaluate those views as your role as a judge.

According to the article, his conservative colleagues barely tolerate Roberts’ consensus-building.

If confirmed, do you have any doubt where Kavanaugh will stand?