Not ‘Happy,’ Trump? Pharrell Still Wants His Song Back 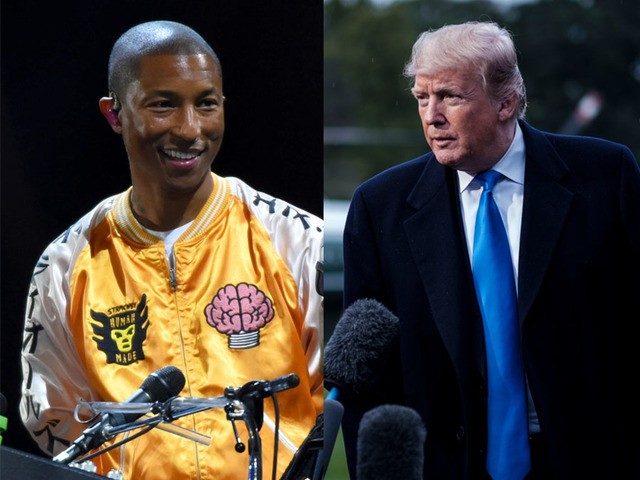 Pharrell Williams joins a long line of artists infuriated by Republican misuse of their songs.

The campaign season isn’t really over until we can pluck some side issue for our amusement or outrage. My choice is the time-honored example of a politician (usually a Republican) using a song at a campaign rally to the displeasure of the songwriter (usually a progressive).

President Trump appeared at two rallies in the Midwest, dispensing his divisive vitriol to his supporters on the same day as the shocking and tragic murder of 11 worshipers at the Tree of Life synagogue outside of Pittsburgh, PA. The song “Happy” blared from the speakers at one of the Trump rallies.

“Rallies are meant to be fun,” Trump told Laura Ingraham of Fox News on the night of the mass murder. 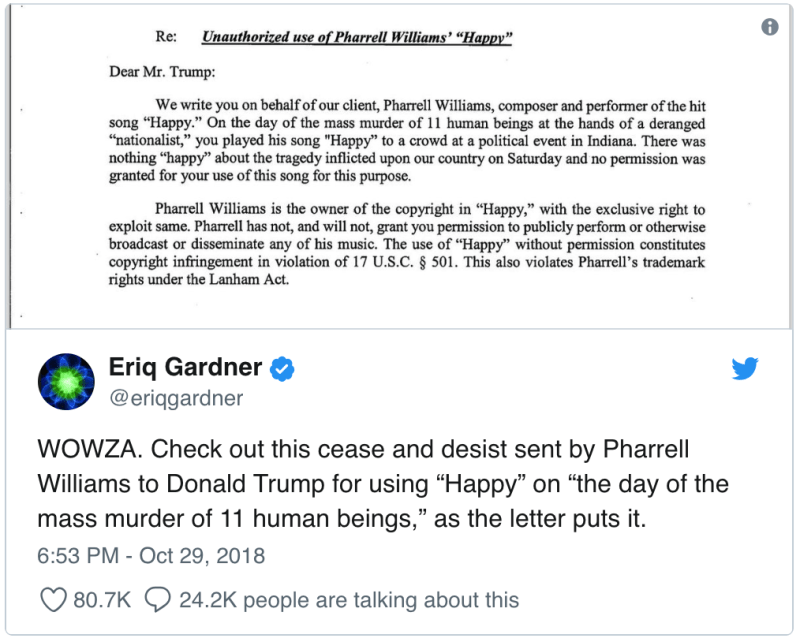 A tweet with an attachment of a letter from Pharrell Williams’ attorney.

The letter, from attorney Howard E. King, is self-explanatory: “Pharrell will not grant you permission to …broadcast or disseminate any of his music.” Seems simple enough. What’s mine is mine, I don’t like you, so I choose not to share it with you. A regulatory framework was designed to remedy disputes, but it gets tricky when there is political animus between parties.

Simply put, a political campaign can negotiate a public performance license from a performers rights organization, like ASCAP, BMI or the new kid on the block, Global Music Rights. These groups protect copyrighted work, track song usage and collect royalties.

The license permits a campaign to play at its events any one of the 23 million songs under the organizations’ umbrella. But even if the campaign is properly licensed (and it’s not known whether Trump, who ignores laws not to his liking, even took the time), there are three sources of copyright liability. From ASCAP:

Given the toxicity of Donald Trump, Pharrell could have called on any of the three. 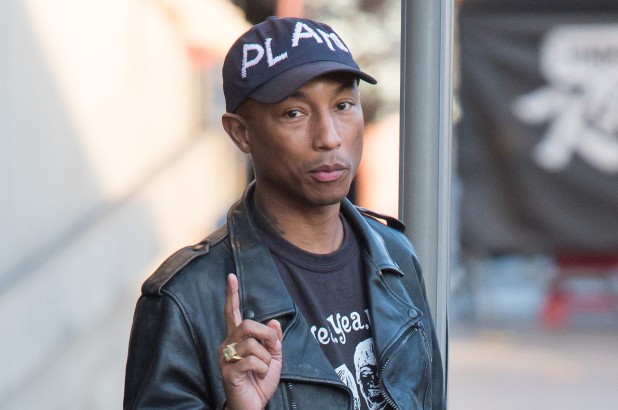 Pharrell is not only a talented singer-songwriter of R&B, hip hop and funk. Along with childhood friend Chad Hugo, Pharrell is one-half of the record production team The Neptunes, producing numerous hit singles for various pop artists. The song “Happy” is off Pharrell’s second solo album, Girl, released March 2014.

There is a long and distinguished list of musicians who pushed back against Republican candidates who recklessly disregard an artist’s brand and reputation to create background music for their political events. USA Today and Rolling Stone each compiled 35 instances. I will give three examples:

Here’s is an enjoyable video of “I’m Shipping Up to Boston,” expertly directed by Mark Higgins and courtesy of YouTube:

Make that defeated ex- governor Scott Walker of Wisconsin. Back when the Walker was a union-busting, starve-education governor, he ran in the 2016 Republican presidential primaries.

While scouting precincts in the Iowa caucuses, Walker dropped the needle on “I’m Shipping Up to Boston” at his gatherings. The Dropkick Murphys were, uh, not “Happy.” The band fired off a tweet to the governor that famously said, “We literally hate you.” Walker stopped using the song. 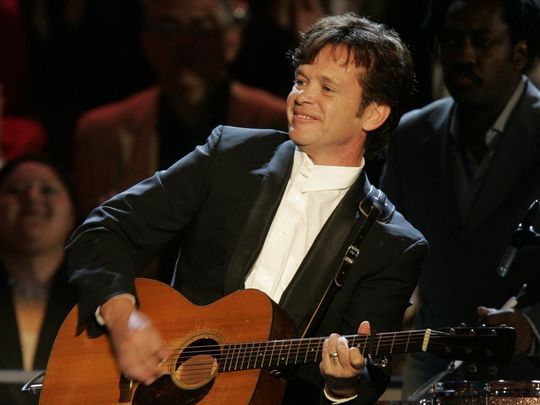 Mellencamp’s progressive brand of populism gave us a tuneful and hopeful vision of the heartland. Prominent Republican politicians fecklessly ignored the left-wing lyrics and aspired to share that optimistic vision as their own.

The prolific Mellencamp denied the 1984 Ronald Reagan campaign from playing “Pink Houses.” He demanded that George W. Bush in 2000 not to use “R.O.C.K. in the USA.” In 2008, the John McCain campaign played “Our Country” and “Pink Houses” until Mellencamp told them to stop. 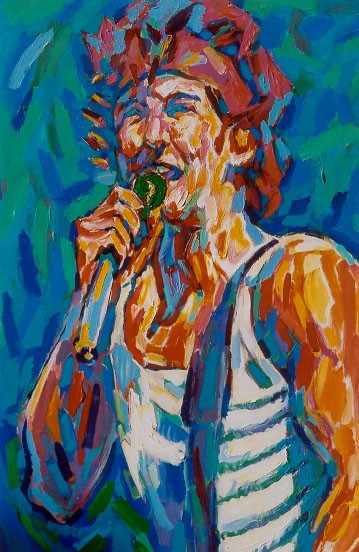 During the 1984 presidential campaign, Bruce engineered the granddaddy of all snubs of Republican politicians.

Legend has it that Reagan had never even listened to “Born in the USA.” But conservative columnist George Will heard the song at a concert and gushed in a Sep. 13 column that Springsteen is “evidence of the astonishing vitality of America’s regions and generations.”

Six days later, Reagan started using the song on the stump. The Boss was not thrilled. Springsteen asked the Reagan campaign not to play the song and they complied.

Republicans sure like to use music by artists who hate them.