The Art of Governing Seems Part of a Bygone Era 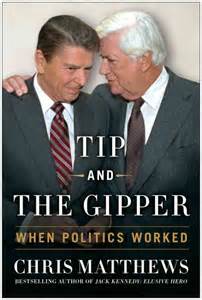 Even Ronald Reagan and Tip O’Neill Would Be Unable to Overcome the Ideological Barricades of the Electoral Map.

Exhibit A: This Scramble to Avoid a Government Shutdown

Hardball pundit Chris Matthews was an aid to Speaker of the House Thomas P. O’Neill, and thus had a birds-eye view to the 1980s historic budget battles between his boss and President Ronald Reagan.

In his book Tip and the Gipper, subtitled When Politics Worked, Matthews tells an excellent story of two political titans who overcame their severe ideological differences to find a way forward…and govern. According to Matthews, it was because of their mutual Irishness and their genuine respect for each other. Matthews:

Less than two years a part in age, they had managed over the course of their relationship thrust upon them to find common ground. Even as each remained an exotic figure to each other,  they managed to appreciate the other’s differences…It’s easy, from the vantage point of today, to mock all those Irish jokes and the swapping of stories…But I was there, and the plain truth is, they kept the conversation going when no progress seemed possible otherwise.

Let me say right now that there will never be a similar book written about President Obama and House Speaker John Boehner. And it’s not because these two men care any less about solving this country’s vexing problems, or about (personal) mutual respect. It’s just that it’s not all about them anymore. I’ll get to that. 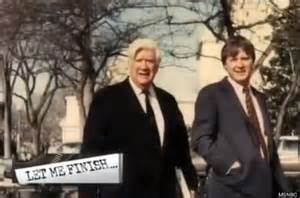 I really enjoyed Tip and the Gipper. Matthews wrote the book in a breezy journalistic style, and employed more patience, respect and reflection than his intentional bombast on his MSNBC Hardball show. But in order to savor this political read, I had to put blinders on, because…I was there, too. I was politically active in the ’80s, and still remember all of the headlines about budget brinkmanship, Reagan’s initial tax cut victories, the resulting deficit…each side scratching and clawing to gain the upper hand in a toxic Washington that sounds very much like today’s. (In fact, in a blistering review of the book, the Washington Post claimed that under the Reagan-O’Neill regime, the federal government was actually shut down seven times through “funding gaps.” Not very good governing.)

But would it work now? Would it be possible for a Tip O’Neill of today to corral the votes necessary to save a Republican president’s skin (and in the process deny Democrats of the rallying cry of “save Social Security” in the 1984 election)? When Tip O’Neill ran the US House of Representatives, he could reach out to certain groups and make deals. Here’s Matthews  describing his fascination with the caucuses within the caucus:

It was easy to spot the cliques. Up in the back…and therefore closest to the Republicans was “Redneck Row.” That was home to Southern Democrats, the members who were the Speaker’s biggest worry…Down on the left side of the chamber…was the “Pennsylvania Corner,” party stalwarts all who represented blue-collar citizens. [There were the] “Watergate Babies” [who] often came from politically moderate suburbia, taking seats previously held by Republicans…These members tended to be more independent than Democrats from big-city party organizations; they were also more reform-minded. 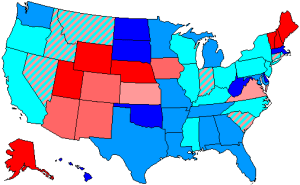 I won’t burden you with a detailed legend of color designations. Basically, the darker the blue, the more Democrat was the state congressional delegation; the darker the red, the more Republican. “Striped” states were evenly split. As you can plainly see, party loyalties were “all over the map.” The north-south retrenchment, as envisioned by President Richard Nixon’s “southern strategy,” had yet to be realized. From this map, Tip O’Neill was able to craft voting majorities, mostly effectively. The ideological barricades had yet to be erected.

There’s no more dramatic example of this than the state of Oklahoma. In the 99th Congress, its US House delegation numbered five Democrats and one Republican. Today it is entirely Republican. 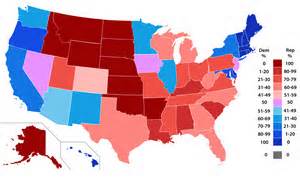 Same color legend; purple means evenly split. The 2014 election increased the House Republican majority and flipped the US Senate to red.  Here’s a reality that perhaps Tip O’Neill couldn’t have imagined: In January there will not be a single Democratic senator in a deep southern state.

So what is to be done (or undone)? President Obama might have a trick or two up his sleeve as he battles a hostile congress and partisan Supreme Court. Or we can wait until the 2020 census and a new round of redistricting, with hopefully some rules changes that would diminish partisan gerrymandering. Or perhaps the political players in Washington could do well to pay heed to the thoughtful, if not quaint, advice offered by the author: 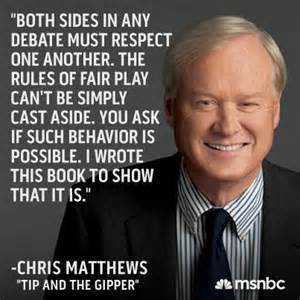 As I write this, the US Congress is rattling its cages to produce a bill by a very urgent deadline. And what would the People’s business be that would cause such maneuvering? Reforming a broken immigration system? Addressing the rampant inequality that is destabilizing this country? Helping families deal with crippling student debt or underwater mortgages?

No, the People’s business this week is to prevent another government shutdown. Such a sad state of affairs.

Chris Matthews has succeeded in making this hardened politico misty-eyed for the eighties.