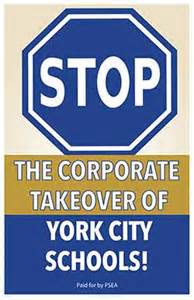 The plan had a devious certainty to it. It contained several elements of a conservative’s dream for public education’s aftermath. Starve K-12 public schools through state funding cuts. Point out academic deficiencies, increased class sizes and curtailed student activities while conveniently omitting the obvious causes. Appoint an overseer (“recovery officer”) to devise a path to corporatized fiscal sustainability. And, in the case of York, Pennsylvania, turn over three of the eight York public schools to a for-profit charter school franchise.

Only it didn’t work. Keenly aware of the community outcry, the York school board last Wednesday voted 7-2 against hiring the charter school operators.  The vote sent the whole matter back to the drawing board, though state law provides that the governor could move for full receivership of the York public schools given that the recovery plan was nixed. In response, a lawsuit was just filed by a group of parents challenging any moves to convert public schools to charters. Thus far, PA Governor Tom Corbett, who will probably be voted out of office on November 4, has wisely demurred. 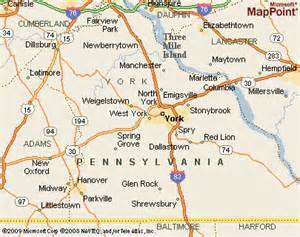 Plight of York Schools: No Money, but a ‘Recovery Officer’

The Corbett era has not been kind to Pennsylvania public schools. Corbett has robotically followed the Republican blueprint of slashing funding for public assets in favor of tax breaks for banks and large corporations. The governor “cut nearly $1 billion from our public schools in 2011,” according to the Pennsylvania State Education Association, admittedly a stakeholder for robust school funding.

In any case, one statistic is telling: In school districts across Pennsylvania, according to Salon, “only 36 percent of K-12 revenue comes from the state, way below the national averages.” (emphasis mine.) The article continues:

The York City district was exceptionally strapped, having been hit by $8.4 million in cuts, which prompted class size increases and teacher furloughs. Due to financial difficulties, which the state legislature and Governor Corbett have by-and-large engineered, York was targeted in 2012…for state takeover by an unelected “recovery official.”

David G. Meckley to the Rescue

In January 2013, the state education secretary, a Corbett crony, appointed David G. Meckley, 61, as chief financial “recovery officer” for York city schools. The head of an engineering consulting firm, Meckley had no…zero…zip…nada…experience in public education, save for his industrial engineering degree at Cornell. (Maybe he hung around the administrative offices and took copious notes.)

It was Meckley who engineered (pun indeed intended) this original formulation: That all eight York public schools be turned over to the for-profit Charters Schools USA (more about them soon). After vigorous opposition to the plan, Meckley, in the spirit of compromise, scaled back his proposal: that just three of York’s eight city schools turn over their management reins to the charter franchise. The avalanche of antagonism continued. 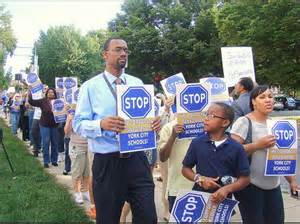 The York community rallies against privatization of public education.

It is indeed a sight to behold when a community springs into action when the education of their children is at stake. School board meetings convened to debate the charter plan have bulged with parents, teachers and students alike. At one such meeting on September 17, a petition containing over 3,700 signatures protesting the charter conversion was presented to the board. A separate petition included the signatures of 260 students at one of the affected schools.

The issue was not necessarily a revulsion over the prospect of charter schools. Community protesters were more concerned about the severity of the solution, and especially the lack of accountability, transparency and control. A telling comment about the severity: “The ‘we need charters to escape dumb rules’ argument is like filling up your car with Long John Silver’s wrappers and empty coffee cups and one day saying, ‘Well, damn, this car’s a mess. Guess I’ll have to buy a new car.’ Clean up the mess!”

Transparency and oversight remain at the heart of the matter…for both York and for charter schools everywhere. Salon sums it up well:

The [York] local school board is being forced to pick a charter provider and make their district the first in the state to hand over the education of all of its children that will call all the shots and give York’s citizens very little say in how their children’s schools are run. None of this is happening with the negotiated consent of the citizens of York. The voices of York citizens that have been absent from the bargaining tables are [now] being heard on the streets and in school board meetings. 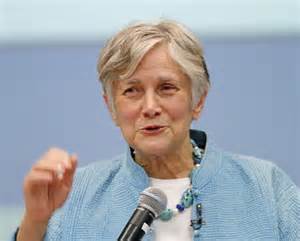 Charter Schools: the Good, the Bad & the Ugly

The concept of free charter schools, its seeds planted in the 1970s, was based on an enlightened notion of filling some gaping holes in American public education. The original charter schools (charter literally meant “schools of choice”) were subject to fewer rules and regulations than traditional public schools, and would therefore have the breathing room to offer specialized and innovative curriculum (the arts, engineering, specialized vocational training) for students who were clearly on that fast track. There were an estimated 6,400 charter schools in this country in the 2013-14 school year.

But like everything else, the devil is in the details. Charter school funding is based on a state per-pupil formula, and charters have managed to cannibalize precious funding that would have otherwise been earmarked for public schools. (Ask any public school teacher what he/she thinks about charter schools.)

The lack of transparency is not only frustrating for parents, who can no longer “walk into my local school district office and ask everything there is to see about district finances.” Charter Schools’ operational autonomy have led to occasional charges of mismanagement and outright fraud, although the sources of these charges can hardly be described as objective. Charter Schools USA, York’s choice to manage three of its eight schools, “was contracted to operate three schools in Indianapolis starting with the 2012-13 school year. Students have left the school in such high numbers that the schools now serve about half the student they did before Charter Schools USA came in,” according to the Pennsylvania State Education Association.

Additionally, a new report from the Center for Popular Democracy, contains fresh details of charter school fraud that has cost Pennsylvania taxpayers $30 million.

But perhaps most important, the charter schools movement, however noble its genesis, has become an “ace in the hole” for enemies of public education. As more and more states allow charter schools to attain for-profit status, the fruits of “reform,” “charter schools” and “privatization” are ominously being put in the same basket.

In her groundbreaking book about “the hoax of the privatization movement and the danger to America’s public schools,” titled Reign of Error, author and educator Diane Ravitch goes on record to say “we ought to ban [charter schools] that operate for profit.” Perhaps just as wise is Pennsylvania teacher Becky Pringle, who asserted: “The York privatization plan won’t save taxpayers one dime. But it will cost them a voice in how their schools are run.”