Dems Counting on ‘Field of Dreams’ for Upset Win: If They Build It, Will They Come? 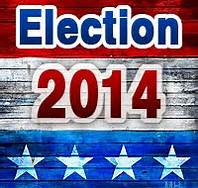 It is an undisputed fact that Democrats have won the popular vote in five out of the last six presidential elections. Every fourth year beginning with Bill Clinton’s election in 1992, the Democratic Party has been able to mobilize its most reliable groups of supporters: young people, women (especially unmarried women), blacks, Latinos, Jews, Asians and the college-educated.

For Democrats, the problem is, and remains to be, the off-year midterm elections. “There has never been a worse coalition for the purpose of a midterm election,” reports David Wasserman of the influential Cook Report.

As chronicled in a previous article on this website, the Republican Party has played its midterm trump card to maximal effect due to several built-in advantages: historically lower turnout, a president with so-so approval ratings, a contented, disengaged opposition, and a Republican party base on the outside looking in that’s fired up. There is also a notion, more anecdotal than verifiable, that Democrats naturally flock to national politics; Republicans local. “A lot of Democrats,” mused political operative Larry Sabato, “don’t think midterm elections are very sexy and they don’t vote.”

That would certainly explain  one other factor in the Democrat’s midterm malaise: As Republicans captured state and local elections, they were able to redraw district boundaries to their full advantage. Without a doubt, the Republicans have worked gerrymandering like a charm.

The recent special Congressional election in Florida, where a Republican lobbyist David Jolly squeaked by well-known Democrat Alex Sink in a swing district, is compelling testimony to the power of turnout. Geoff Garin, pollster for Alex sink, explains:

Once upon a time, I had a bird’s-eye-view to a turnout operation that was breathtaking it its efficiency but that ultimately failed to get its candidate reelected. The year was 1979 and the “Boy Mayor” of Cleveland, Ohio, Dennis Kucinich, was running for reelection. Kucinich had recently survived a recall election by a few hundred votes (I’ll spare you the details), and now faced a formidable opponent in Lt. Gov. George Voinovich.

Kucinich’s constant battles with City Council, the media and especially the business community had created a sort of fatigue among Clevelanders. Raising big money to tout his accomplishments as a “people’s mayor” was deemed an absurdly impossible task. Kucinich decided to take his message–that Voinovich was a “fat cat” bought and paid for by Big Business–directly to Cleveland’s neighborhoods by way of an ambitious field operation. I was one of the boots on the ground. 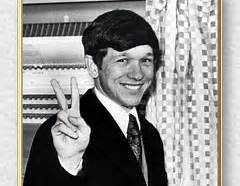 And how did I, Philadelphia born and bred, get to be one of Dennis Kucinich’s minions? I met Kucinich’s top advisor, Bob Weissman, at a conference at Bryn Mawr College, PA, and was hired on the spot to work in Cleveland’s city government. I was part of that infamous group of “out-of-town radicals” that would work with the locals to lift the mayor’s sagging fortunes. Little did I know when I was hired (well, I had an inkling) that my job in the city’s CETA program would be secondary to walking Cleveland’s neighborhoods with leaflets containing a message from the mayor. Every day after work and all day Saturday, I would report to a large conference room where Weissman and his protégée Betty Grdina would articulate Voinovich’s horror du jour, distribute the leaflets and assign “turf.” I hardly kept track, but I’ll bet I walked every street on Cleveland’s west side (and got to know many dogs on a first-growl basis). It was brutally efficient. On election day, Kucinich got the short end of 55-45. I’m guessing the good people of Cleveland just wanted the noise to stop.

This is a story about how the Democrats plan to data-mine and door-knock their way to victory in November. This is not about judging the messaging of either party. We can argue all night about whether Obamacare is a winning issue for Democrats or Republicans. The point is, the Democrats’ prime mission is to make the 2014 midterm electorate more closely resemble a presidential election year. Five out of six is a very compelling statistic.

The “Bannock Street Project”…that’s the Democratic Senatorial Campaign Committee’s (DSCC) scheme is to engage their base of support and narrow the “enthusiasm gap” by devising sophisticated targeting and ground operations in 10 states. The project would cost over $60 million and would involve 4,000 paid staff members (work on those resumes!). DSCC Executive Director Guy Cecil was blunt about priorities: “Yes, we have to be on TV…but we’re not willing to sacrifice the turnout operation or the field operation to do that.”

Prominent in any political operative’s toolbox is the use of microtargeting. Long practiced by commercial direct marketers, microtargeting involves the building of a database that tracks voter preferences so that political messages are custom-made to a particular voter. “We can now literally target the household,” gushed a Republican operative. The same New York Times article described the process:

The process for targeting a user with a political message takes three steps. The first two are common to any online marketing: a “cookie,” or digital marker, is dropped on a user’s computer after the user visits a website or makes a purchase…The political consultants then takes a third step and match that data with voting records, including party registration, and how often the person has voted in past election cycles…Throughout the process, the targeted consumers are tagged with an alphanumeric codes, removing their names and making the data anonymous. 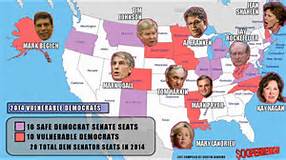 Vulnerable US Senators in 2014 midterm election

The above graphic may serve as a reminder of how consequential these get-out-the-vote efforts are. Pictured here are some very good Democratic US Senators running in extremely close races in mostly red states. “Most of the crucial Senate races lie in battlegrounds so friendly to [losing presidential candidate Mitt] Romney that Mr. Obama did not contest them in 2012,” reported the New York Times. Here’s another look at it: 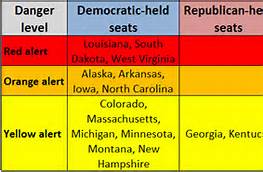 So what’s at stake here? Because of redistricting, the Republican stranglehold on the House of Representatives seems to be secure for this election cycle. The Democrats control the Senate by five seats, 55-45, counting the two independents who caucus with the majority party. Recently, celebrity statistical analyst Nate Silver and his firm FiveThirtyEight changed his US Senate election forecast from “toss up” to “slight favorite” for the Republicans. “We think the Republicans are now slight favorites to win at least six seats and capture the chamber,” Silver wrote.

Think about it…Republicans running both the House and the Senate. Think of the remaining elements of the president’s agenda–immigration, the minimum wage, climate change, early childhood education–and their diminished chances of becoming law. Think of a Republican majority emboldened to chip away at the safety net, such as Rep. Paul Ryan’s (R-WI) renewed promise to turn Medicare into a voucher program. Think of all the settled law on personal equality and women’s issues that will be thrown up for grabs.

It makes me want to look for my Cleveland walking shoes.