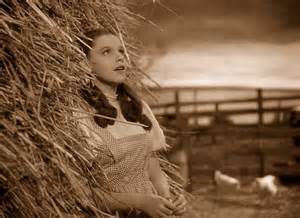 What’s the Matter With Kansas?

Editor’s Note: This article was originally published on July 17, 2014. I changed the date quite simply to make it more accessible to readers who are following the tax bill in Congress. Other than the date, no substantive changes were made to the article. None were needed. The events that took place in Kansas during the years 2012-14, in which the governor and his party attempted to prove that steep tax cuts pay for themselves and stimulate economic growth, resonate more than ever in today’s debate over tax reform. Kansans still live with its consequences.

Last time around, “Bleeding Kansas” referred to the pre-Civil War days (1854-58) in the Kansas Territory, where violent clashes were widespread over whether Kansas would be a free or slave state. Kansas would enter the Union in 1861 as a free state.

Today, another civil war is brewing in Kansas, this time in the ranks of the state Republican party.  In the words of a former state senator, “”We are deeply concerned by the direction Sam Brownback is taking Kansas.”

What’s the matter with Kansas? 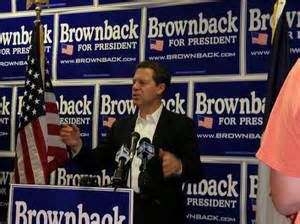 Gov. Brownback’s approval rating in his state stands at 33 percent. This is an amazing, almost unprecedented development in an entrenched red state such as Kansas. What did Brownback do to deserve this?

In 2012 and 2013, Gov. Brownback and his fellow Republicans in the state legislature passed a series of tax cuts that were the largest ever enacted by a state. The total package of tax breaks will have cost Kansas up to $1.1 billion in revenue. The 2012 cuts were especially deep, “reducing the top tax bracket by 25 percent, and eliminating all taxes on [small] business profits that are reported on individual income returns.”

The 2013 cuts further reduced income tax rates for the highest wage earners. Brownback was relying on the right-wing orthodoxy (called “trickle-down” or “supply-side”) that cutting taxes, especially on wealthy people, paid for themselves through economic growth.  Only the growth never showed up. 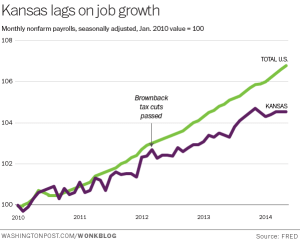 Last spring, the state intended to collect $651 million from the personal income tax. Instead, it received only $369 million. One of the major problems with small business tax cuts is that “a lot of beneficiaries of the tax break won’t be small businesses…Many are sole proprietors engaged in labor, not entrepreneurship, and aren’t likely to hire anybody just because they receive a tax break.” The website Vox spoke to many Kansans about the state’s economic predicament:

“Governor Brownback came in here with an agenda to reduce the size of government, reduce taxes and create a great economic boom,” says University of Kansas professor Burdett Loomis. “Now there’s been a dramatic decline in revenues, no great increase in economic activity, and we’ve got red ink until the cows come home.” 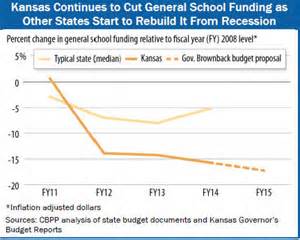 Stunted job growth (Kansas was one of only five states to lose employment in the last six months) is not the only problem facing Gov. Brownback and the good people of Kansas. Declining revenues always lead to slashing funding for schools and other essential services. According to a study by the non-partisan Center on Budget and Policy Priorities,

Kansas is a cautionary tale, not a model. As other states recover from the recent recession and turn toward the future, Kansas’ huge tax cuts have left the state’s schools and other public services stuck in a recession, and declining further–a serious threat to the state’s long-term economic vitality. Meanwhile, promises of immediate economic improvement have utterly failed to materialize.

Budget cuts are merely numbers, and don’t often reflect their human toll on the safety net. The CHOICES Family Emergency Shelter in southeastern Kansas houses about 350 homeless people every year, most of them families and children. The shelter closed its doors this week due to lack of funding; it received less than half of the $200,000 it need to continue to operate. According to shelter operator Steve Lohr, “this is the first time in our 48-year history that we haven’t received state funding.”

Kansans are stuck with the consequences.