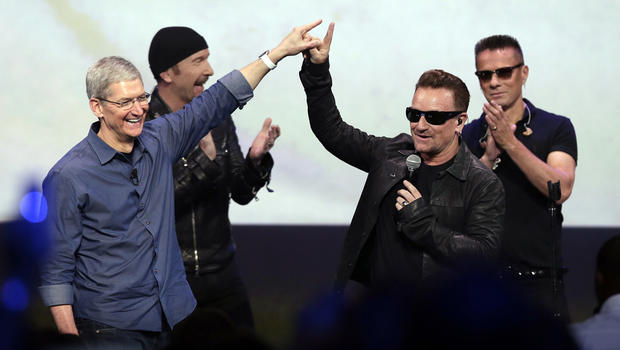 Is Spotify the spoiler in Apple’s U2 victory dance?

$165 per share. That was the opening price for Spotify’s Initial Public Offering (IPO) on Wall Street yesterday, April 3. And though the share price headed downward during the first hours of trading, it was a heady time for the Swedish-based music streaming service that reported operating losses  of $461.3 million last year.

In the investing world, it’s all about the future. And despite glaring omissions in Spotify’s music catalogue (which is deemed temporary), it is Spotify’s business model that has made it poised to outflank America’s most valuable company.

Meanwhile, a hacked email from Apple to its music industry partners has prompted an avalanche of speculation about the future of Apple’s iTunes. The email announced “the end of iTunes LP’s,” by the end of 2018, which is being construed to imply that Apple is abandoning the selling of albums on its iTunes platform by year’s end.

If true, the alternatives all lead to a sort of algorithmic playlisting in the model of, uh, Spotify?

Despite the phenomenal growth of downloaded song sales during his company’s 11 years in the digital music business (see graphic, below), Apple CEO Tim Cook could see a future clouded with uncertainty: Overall digital music sales have fallen steadily. (see chart below.) 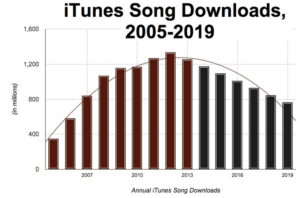 It had been a good run for iTunes. When Apple opened its iTunes Music Store on April 28, 2003, it would change the music business forever with the cheap digital single. In 2000 Americans bought 943 million CDs, and the record company business model was churning on all cylinders. By 2007 digital units overtook CD sales; by 2012, downloads dominated CD sales by a factor of 7-1. 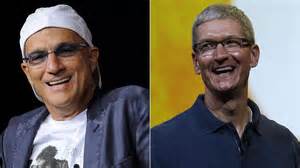 As you well know, Apple bought Beats Electronics, which was less than a year old, for $3 billion and change. Apple not only got the streaming service it desperately needed to stay in the game, but the package came with Jimmy Iovine and Dr. Dre (Andre Young), music industry kingpins who assumed executive positions in Cupertino.

Music business stalwart Jimmy Iovine (pronounced EYE-o-veen) began his Apple career with a chit in his pocket from none other than Steven Jobs, Cook’s legendary predecessor. It was Iovine who “became a friend and crucial advocate for Mr. Jobs as he tried to persuade nervous record executives to sell their songs a la carte.” The rest as they say is history, and Iovine (and Dr. Dre) were well taken care of:  A big cash payout for both reportedly worth over $400 million.

Apple’s plunge into the subscription streaming market ably illustrates the lightning-quick evolution of digital music. It has gone from CDs to downloads to streaming in just 25 years. This breathless transformation stands in stark contrast to the slow development of recorded music in human history.

Thomas Edison’s “tinfoil cylinder” phonograph first recorded the human voice in 1877. Edison then launched his “speaking phonograph” company commercially, only to be beaten to the punch by a one Emile Berliner, whose Victrola (playing 78 rpm vinyl discs) became the talk of the town in 1905.

Columbia Records came up with 33 1/3 long-playing records in the 1940s, followed by Decca’s innovation with high fidelity sound. The 3M Company developed recording tapes that fit perfectly with Ampex’s tape recording machines. In 1963 Phillips introduced the audio cassette tape, examples of which are probably stored in the back of one of your closets.

It was Sony which revolutionized the personal recording device in 1978 with its Walkman. The company sold over 100 million of them. Meanwhile the digital revolution began in earnest around 1987, when a German company advanced a technology called MP3…short for Motion Pictures Expert Group, Audio Layer III. MP3 audio coding could “shrink down the original sound data from a CD by a factor of 12, without losing sound quality.” 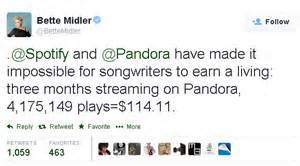 If subscription streaming is indeed recorded music’s next frontier, artists such as Bette Midler (above) are most definitely not singing its praises. Musicians are paid royalties on songs they write and record, and the formula gets a bit complicated when a song is streamed and not sold.

In the new economy of streaming music, nothing is sold: Spotify, Pandora and, yes, Beats, pay “fractions of a cent to record companies and publishers each time a song is played, some portion of which goes to performers and songwriters as royalties. Unlike royalties from a sale, these payments accrue every time a listener clicks on a song, year after year.

Okay, you can make the case that a number of listeners clicked on the artist’s songs because there were no monetary consequences. But still…it affirms the record industry joke that if royalties from downloads are a “river of nickels,” streaming music looks more like “a torrent of micropennies.”

According to Digital Music News, signed artists on the Apple Beats platform, which pays $0.0073 per stream, would need to accrue 200,000 plays to earn the federal minimum wage. Signed artists on Spotify would require 340,000 plays at the per-stream rate of $0.0044. 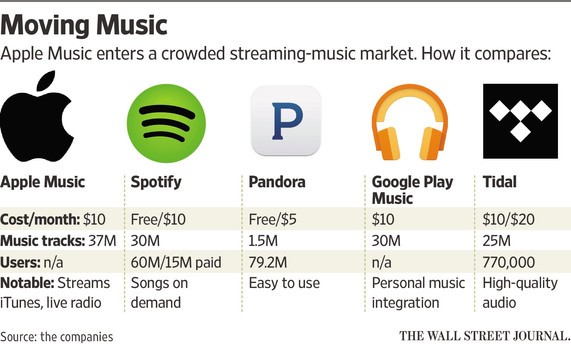 May the Best Stream Win

At present, Spotify, with its unique free-tier service, is the king of on-demand streaming, with 70 million subscribers and listeners. Its music library was helped considerably when Taylor Swift recently released her new album on Apple’s and Spotify’s platforms simultaneously.

Jimmy Iovine might be music royalty but artists go where the listeners are.

But don’t count out Apple Music: It still has the largest music library by a wide margin. Whatever emerges from its iTunes reconstruction could possibly shake the foundation of the music business.

They’ve done it before.