Local News No Easy Conquest for Trump’s War on Media 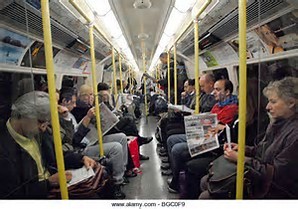 A scene from the past, a long time gone. Yesterday, I walked the entire length of a Broad Street Subway train in Philadelphia, and did not see one newspaper open.

Will Donald Trump’s poisonous scapegoating of our media ‘trickle down’ to state and local coverage? Maybe not.

As we gird ourselves for another battle against Republican efforts to deny health care to millions of Americans, you get the feeling that the fight has only just begun. And other issues won’t be so clear-cut.

Sure, it was fairly easy to mobilize thousands of people who were reluctant stakeholders in the ill-fated repeal effort: their grandmothers getting kicked out of nursing homes, preexisting conditions claims attached to outrageous price tags, life-changing drug rehab placements denied.

But what about the Trump administration’s counterfeit attacks on the legitimacy of our mainstream media, which they have tagged, “the enemy of the people”? A pillar of our democracy is under attack by none other than the president himself, whose motivation is purely selfish, adversarial and…because he can.

The consequences are chilling. Just read any of our Founding Fathers’ views that equate a robust, adversarial press with a durable democracy. But what of our local, community-based news coverage? Will it be a victim or a survivor? 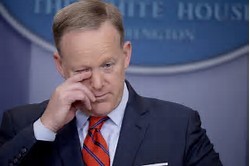 That’s the “fake news” and I am outta here!

We have grown quite familiar with Trump’s treatment of working journalists: Prohibiting the traditional “on-camera” briefings; Denying certain out-of-favor media outlets, like the New York Times and CNN, a place in the press “gaggle” in Press Secretary’s office; and “rogue” press conferences in which the only media called upon are simpatico “alt-right” players such as Breitbart or InfoWars.

If you want to keep track of Donald Trump’s media skirmishes, this website is the place to go.

As classic bullies, Trump and his crowd prefer to pick on the more vulnerable among us. As I reported on this website in July 2015, traditional media advertising revenues continue to be cannibalized by Google and Facebook, both of whom run massive news businesses without newsrooms. Media outlets have no choice but to compete for the scraps.


As the newspaper business diminishes or consolidates, more and more communities are left without a local paper. That’s a lot of city council meetings and land deals that aren’t being scrutinized. And it’s not just rural America where there’s a hollowing out of news coverage. Urban and suburban areas are also being deprived. It’s an environment tailor-made for “fake news” trolls.

The Columbia Journalism Review has begun to assemble an infographic of America’s growing news deserts. They could use your help. To examine it, please click here.

An example of CJR’s infographic. The darker the area, the better the coverage.

After the 2016 election, according to the Columbia Journalism Review, Republican governors in at least three states advocated legislation stipulating that “Legal Notices” were no longer required to be published in local newspapers. Spun as a cost-saving measure, this could be a death penalty for local papers that rely on Legal Notices for a substantial portion of their revenue.

Of course Trump’s press-bashing has become a page in the playbook for local officials caught with their hands in the cookie jar. Officials in at least two states have been documented as labeling “fake news” the reporting of wrong-doings such as taking bribes or unpaid parking tickets. Hey, the president does it…

Local news operations count on the Freedom of Information Act to sue to gain access to information.  But lawsuits cost money. “The loss of jobs…and publishers’ declining profits mean there’s less opportunity to…sue for access to information,” according to a Knight Foundation study. 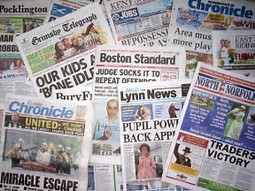 Fate of Media Belongs to the People

For people who believe that a robust media is indeed a pillar of democracy, there is cause for optimism. The leaking of information from various government sources both inside and outside the White House may frustrate Trump and his minions, but it demonstrates the power of information and the supremacy of truth.

Even in the midst of an almost daily pounding of media, and especially CNN, by the president’s bully pulpit, it appears a majority of Americans aren’t convinced. According to the political website The Hill, a recent survey indicates that 54 percent trust CNN more than Trump, while 39 percent trust the president more. Other traditional media outlets, according to the poll, also enjoyed majorities

Ever since election day, 2016, there has been a surge in subscriptions to traditional media and donations to non-profits, such as public radio. For example, Pro Publica, the outstanding progressive investigative news platform, told Marketwatch that it has collected $250,000 in credit card donations since the election, compared to $300,000 in giving of all types all of last year.

“We’re averaging one gift per minute,” Pro Publica President Richard Tofel said at the time. “A lot of people, in response to the election, feel the need to take civic action. A fair number of people are doing so by supporting a vigorous press, and we’re honored.”

Somewhere along the line, getting the big local story stopped being “cool.” It seems more and more young journalists are seeking to create new journalistic models on digital platforms to express their talents. I applaud these young entrepreneurs but what’s been left behind is the basic work of covering communities.

The hope here is that the local vacuum becomes a business opportunity. For example, Gannett Corp., publishers of USA Today, are poised to rebuild a network of local newspapers, “supported in part by their ability to scale for national advertising.”

According to Columbia Journalism Review, non-profits and public radio and TV, fueled by an outpouring of donations and sponsorships, will play an increased role in tandem with local papers to return local news to its rightful place as a community leader.

CJR: “It is easier to find common ground with someone who lives nearby. Locally-based news organizations are well-positioned to be a part of rebuilding that trust.”