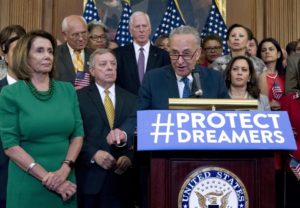 Schumer and the Democrats chose to live to fight another day. Source: theatlantic.com

White House and Congressional tormentors of Dreamers want to turn back the clock on immigration.

At a press briefing on Wednesday, Donald Trump turned the tables on shutdown rhetoric by offering the Dreamers, those eligible for the Deferred Action for Childhood Arrivals (DACA), a path to citizenship.  Was it a rare moment of grace by our petulant president? Not really.

By Thursday afternoon, White House officials slowly unveiled the outlines of a price tag for this largess: An additional $25 billion to build the wall along the Mexican border and, significantly, the repealing of “chain migration,” which is migration based on family ties.

Regarding Dreamers, the Trump White House saw the political writing on the wall:

A new CBS News poll reveals that 87 percent of Americans support allowing immigrants who were brought into the US illegally as children to stay in this country.  Even a majority of Trump voters support the Dreamers.

A majority of Americans polled by CBS oppose building the wall, although seven out of 10 Republicans support it.

Who are the Dreamers?

DACA is an immigration policy established by the Obama administration that allows foreign-born individuals who entered the country before their 16th birthday and have lived in the US continually, to receive a renewable two-year period of deferred action on deportation, and be eligible for a work permit.

There are currently around 800,000 people enrolled in the program, most of them originally from Mexico. Nearly half of all Dreamers live in California and Texas. Most Dreamers are ages 25 or younger.

To be eligible, Dreamers must be enrolled in school, or awarded a high school diploma or GED. Dreamers can serve in the Armed Forces but must earn an Honorable Discharge. Dreamers lose eligibility if they have been convicted of a felony or up to three misdemeanors.

DACA does not provide a path to citizenship nor eligibility for federal entitlements such as student aid.

Since the Trump administration rescinded the policy in September 2017, the first group of DACA enrollees are due to lose their protections on March 5, 2018. 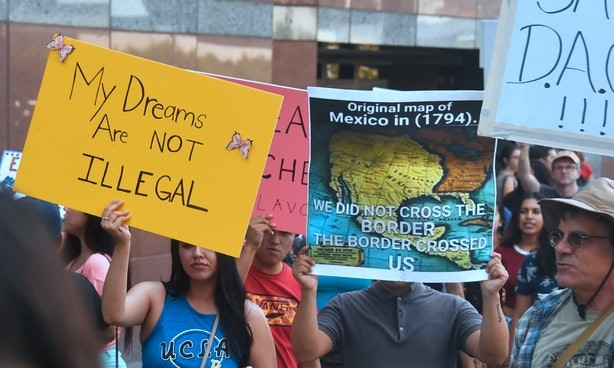 Donald Trump fired the opening salvo in the 2020 presidential campaign (provided he won’t be wearing an orange jumpsuit) with an angry TV ad full of white nationalist dog whistles about illegal immigrants’ propensity for murder and the Democrats’ complicity in their “crimes.”

Not only has DACA changed for the better the lives of the 800,000 Dreamers who have lived in the US since childhood. Most economists regard immigration as an economic boon, with DACA a unique driver of “increased consumption and overall demand for US services, products and jobs where the DACA recipients live and spend.”

Those are simply the realities of demand-side economics. But what would happen if hundreds of thousands of young people were yanked out of the workforce, upending their lives and the lives of their loved ones and creating an enormous disruption for the businesses that employ them?

According to the Center for American Progress, rescinding DACA would result in a loss of $460.5 billion from the national GDP in the next decade. That number represents lost productivity, lost tax revenue and deportation costs.

The report states that ending DACA would remove 685,000 workers from the economy. With the US economy at “full employment,” few economists would agree with Attorney General Jeff Session’s notion that these jobs could go to “real Americans.” These are hard jobs gratefully and productively performed by immigrant labor.

Yo, Trumpsters:  We Are a Land of Immigrants…Remember? 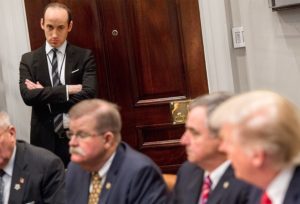 An excellent recent article in Politico  examined how Trump’s anti-immigrant crackdown could have affected the families of Trump’s most ardent surrogates. These Dreamer tormentors share Trump’s aim to shape immigration policies that favor merit-based and language-based preferences right out of a white nationalist playbook (an accomplished English speaker “from Norway” would go to the head of the line).

Here’s how those policies could have affected the fates of two Trump supporters:

This 1910 census form implies that Miller’s own great-grandmother could only speak and read Yiddish. Click on it.

But by immigration policy crafted by Miller, his family would have been turned away. In the 1910 census, Miller’s great-grandmother is identified as speaking only Yiddish. 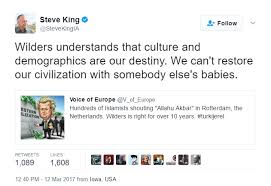 Immigration hardliner Steve king, Republican from Iowa, famously pronounced that “we can’t restore our civilization with somebody else’s babies.”

But given the prevailing sentiment back in 1894, King’s grandmother Freda Harm was indeed one of those babies, arriving at Ellis Island from Germany at the age of four with her parents and two siblings.

Why all this mean-spirited hypocrisy? Could it be an irrational fear of people of color? That seems to be the only rational explanation.