The following video, 3 minutes, 10 seconds long, was published by Guardian News and shown here courtesy of YouTube. It expertly reprises the most damning of President Trump’s remarks at the press conference with Russia president Vladimir Putin in Helsinki, Finland.

In the constant chaos of endless news cycles, we must never let the American people forget about Helsinki.

A member of a state Republican organization:

We have now witnessed the very worst humiliation of a president of the United States ever, and one of the lowest points in the history of the American presidency. 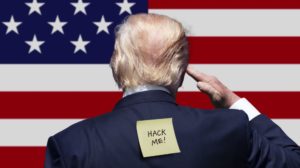 The Firehose of Falsehood

Yes, I realize the summit between President Trump and Russian president Putin was over three weeks ago. The thing is, we live in a 24-hour news cycle and experience “rapid and continuous” information chaos, based on a Russian propaganda model that’s been adopted by Trump and his minions. (see graphic)

They don’t want you to catch your breath and focus on the really bad things.

Taking Putin’s Side Over America’s

And what could be worse than watching an American president desperately flattering a foreign adversary, taking a murdering thug’s word over the American intelligence community, not holding the adversary accountable for verifiable attacks on our country and pronouncing a “good deal” to the thug’s proposal to send our former Russian ambassador to the Kremlin for interrogation (in a rare act of independence, the Senate nixed that one, 98-0)?

It’s all there in the video.

Disclosure: I am a Democrat but am also a dedicated politico. I observe most political transactions analytically, judging mainly on how they affect the balance of power between left and right.

But I will admit to you that I felt the sting of shame when I watched that press conference. It wasn’t even about my disdain for Donald Trump. That was my country being humiliated. I had the same reaction as the Republican party official quoted above. 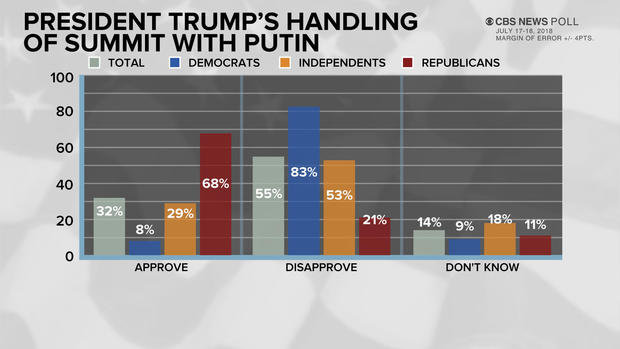 Trump’s performance at the Helsinki press conference has done him some damage in the court of public opinion. A new Quinnipiac poll revealed this surprising result: 51 percent of voters believe that “the Russian government has compromising information about President Trump.” To put it another way, more than half of Americans believe Putin has dirt on Donald Trump.

The poll, which surveyed 1,177 voters from July 18 through July 23, also disclosed Trump’s approval rating as below 40 percent following his summit with the Russian president. Close to 54 percent of respondents said the American president was not acting in the best interests of the United States. Seventy-three percent called the summit  a “success for Russia.”

As for hard-core Trumpsters, they’re lost to us for now. I heard recently that their new conspiracy theory was that Trump is working with Robert Mueller to shut down a pedophilia ring run by Hillary Clinton and President Obama. As Elaine Benes exhorted frequently on Seinfeld, “Good job!”

We have no idea whether Robert Mueller has the proverbial “smoking gun.”

We have one right here.