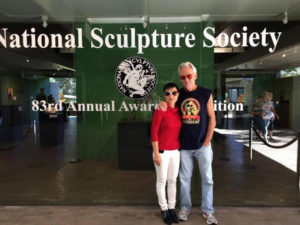 Steve Flom with partner Sally Li Mai at the National Sculpture Society gathering in fall 2016. Steve had one piece on display.

There’s beauty in those rocks

This story starts at the demolition site of the Bulletin building in Philadelphia.

As a recent graduate of Temple University’s school of journalism, I was naturally saddened by the demise of the Philadelphia Evening Bulletin in 1982. Philadelphia journalists took pride in working in a city with two broadsheet newspapers (plus a tabloid). Now we were down to one…just like most other podunk towns. (Little did we know…)

One person who didn’t share my sadness was Steve Flom, a good friend with whom I had grown up in Bryn Mawr, PA, a suburb of Philadelphia.

In fact,  Flom had a spring in his step. While I was looking at the decline of robust journalism, Steve was looking at big boulders…blocks of stone left behind by the Bulletin building’s demolition. You could see the gleam in his eyes.

Beloved Philadelphia/South Jersey stone sculptor Steve Flom graduated from the prestigious Pennsylvania Academy of Fine Arts (PAFA) just about the time I was finishing up Temple. The Academy is a great place to study art.

So naturally, Steve has won numerous prizes and awards in juried shows throughout the region. As a former wood sculptor, Flom must have been eager to have a joint exhibition with wood sculptor Joe Brenman. The show, Wood & Stone, took place in the fall of 2015 at Marlin Gallery in Blackwood, NJ. 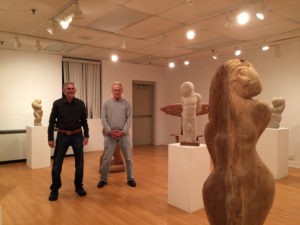 The following year, Flom’s piece, Introspection, was installed at the Camden County College in Blackwood. 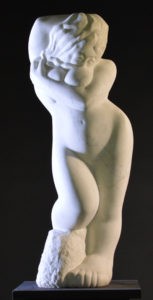 Lovers of stone sculpture can delight in Flom’s work at the remotest of locations: 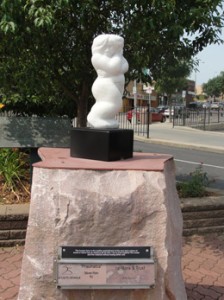 On working in stone:

As a student at the Academy, I worked summers trimming trees, so I had good access to wood for carving. But hoping to sell my work, I sought out a more ‘permanent’ medium…One could scrounge marble doorsteps from abandoned South Philly rowhouses and limestone blocks from demolition sites. I picked up a set of stone tools and never put them down…Working in stone is like searching for life’s essence.

Strangers When… by Steve Flom

I try in my work, using the human form, to convey, ‘life’s longing for itself.’ It’s the solitude, silence, shyness, the loneliness, the longing, the lust. “Love has no other desire but to fulfill itself.” –Khalil Gibran 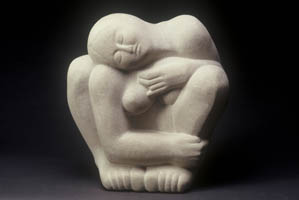 On the method of his work: 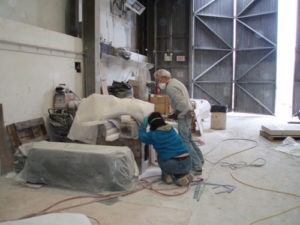 Flom in his studio with an assistant.

I look at a block of stone and try to visualize the figure within…I like to work with rectangular blocks… I’ll make a couple of rough sketches, and ask the model to take the pose…I like to draw the pose from front to back to sides…I also like to take back-up photos…I’ll redraw, carve, redraw, carve, working round and round and round…Usually the stone itself will influence the piece, and it’ll become the fusion of the model and the medium. 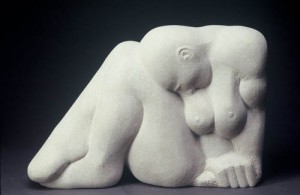 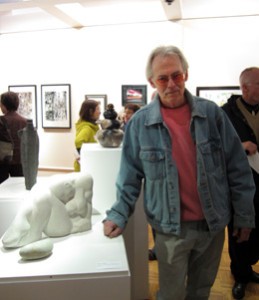