Tax Scam Will Cost Republicans Big-Time in the 2018 Midterms 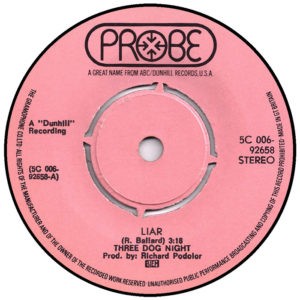 LIAR! Democrats have to do more than sing about it. Source: 45cat.com

Even flagrant GOP lies can’t rescue the poll numbers of this legislative turd. 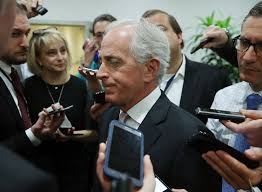 Like thieves in the night, the Republican majority in the US Senate (with the exception of Bob Corker of Tennessee, who did the honorable thing) passed a wealthy donor’s ass-kissing, trickle down tax bill that betrays the very people who allegedly propelled reality TV star Donald Trump into this country’s highest office.

The Senate bill now goes to conference, to be reconciled with the House bill, which was just as bad.

The bill would steal the health insurance from up to 13 million Americans by eliminating the individual mandate from the Affordable Care Act (Obamacare). The ACA’s mandate is an unpopular but necessary tool to require healthy people to be a part of the insurance risk pool. It’s what makes insurance work. If only the unhealthiest among us signed up for the ACA, premiums would naturally skyrocket, making it harder for people to afford health insurance. 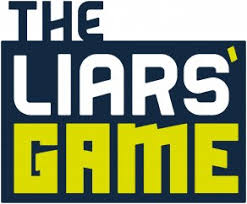 Prominent Republican leaders, Trump included, have gone on record to recite obvious untruths about its house-of-cards of a tax plan. Three come to mind:

Even if Republicans manage to pass something, Democrats will have been given a gift. Usually, bad things await a political party that makes a mockery of public opinion. The Republican tax bill is supported by an average of just 30 percent of all Americans.

According to one PAC consultant: “The GOP tax plan has something for everyone to hate.”

Democrats are fighting back. So are some Republicans. Expect to see many of these babies between now and November 2018, this one courtesy of YouTube and the Washington Post:

The Democratic Congressional Campaign Committee (DCCC) has set its sights on making the Republican occupants of House districts won by Hillary Clinton in 2016 “endangered species.” 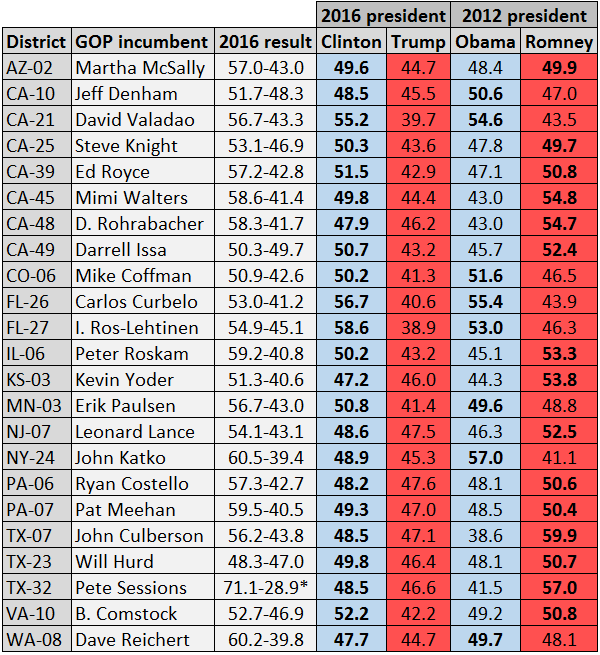 Republicans in House districts won by Hillary Clinton. There have been a couple of retirements. If you live in one of these districts, get involved! 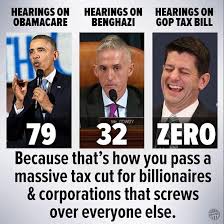 Additionally, Democrats are poised to make a  seven-figure purchase of TV advertising targeting House Republicans representing districts that flipped from Obama to Trump. The first ad buy of about $1 million will target a dozen House districts in battleground states with a heavy presence of working class whites. This constituency will presumable be receptive to an anti-tax bill message that’s in two parts:

Can we make it happen? Can Democrats, and not Donald Trump, take a powerful populist message to white working class neighborhoods? It sure beats the racist alternative.

Democrats still have to contend with trickle-down messaging: a pro-Trump PAC is out with ads arguing that cutting taxes for corporations and the rich will lead to “an explosion” of investment and wage growth. But this fantasy is becoming a tougher sell for Republicans: A recent Quinnipiac poll shows that even Trump base voters rejecting that argument by a plurality of 47-42 percent.

The tax bill is on a collision course with Republican efforts to avoid a government shutdown by Friday, Dec. 8, when the Treasury runs out of money. Because Republicans need Democratic votes to either pass a stopgap measure or long-term funding, hardline conservatives in the House are said to be using the tax bill as leverage to avoid compromising with Democratic priorities, especially the “dreamers” and the Children’s Health Insurance Program (CHIP).