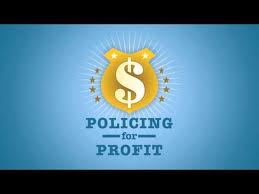 While the Feds Continue to Seize Staggering Amounts from Innocent People, Many States Are Taking Measures to Moderate The Practice

In my original July 2, 2014 article on civil asset forfeiture, I made the argument that the practice of police seizing cash and property from people suspected of criminal activity, whether or not they’re found guilty or innocent, has amounted to a free ATM for law enforcement agencies. It is well-known that cops prey on the foreign-born, people of color, women with children and the poor: those who lack the resources, the time or language skills to fight to get back what’s theirs.

It is an odious practice that has gone unnoticed until recently. For those of you unfamiliar with tis issue, I urge you to read my original article for background. The article remains the most popular post by a long-shot on this website. 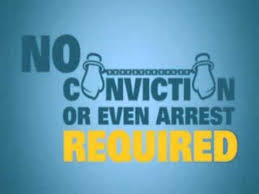 Feds Grab $3.2 Billion From People Not Charged With a Crime

The recent report from the Justice Department’s Inspector General was eye-opening: Since 2007, of the $4 billion that the Drug Enforcement Administration  (DEA) seized from drug suspects, a full 81 percent of those seizures, amounting to $3.2 billion, never led to criminal charges, much less convictions. That means four out of five people ensnared by a DEA drug net lost their money despite not being charged with a crime. It’s all perfectly legal.

That money became part of the Department of Justice’s Asset Forfeiture Fund, which has ballooned to $28 billion. According to the Washington Post, the feds in 2014 alone “seized $5 billion in cash and property from people–greater than the value of all documented losses to burglary that year.” 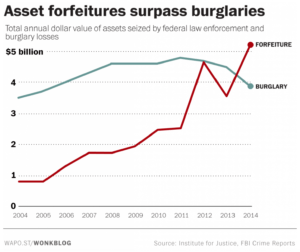 Texas Sheriffs Get a Visitor

While the federal government gorges on its free money, more than a dozen states are considering either abolishing civil asset forfeiture or making the rules more equitable. Texas is one of those states with a forfeiture reform bill in the state senate, but that’s not going down too well with Texas law enforcement officials, who imagine tens of millions of unsuspecting people’s dollars go poof. No way.

Weeks ago, real-estate-heir-turned-politician Donald Trump made a visit to Rockwell County, Texas, where Sheriff Harold Eavenson told Trump that he told the sponsoring state senator that “the cartel would build a monument to him in Mexico” if he continued his reform efforts. Yeah, right. 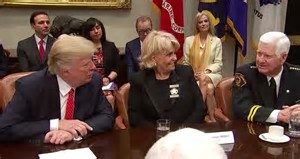 Trump responded in his usual way:

Do you want to give me his name? We’ll destroy his career.

In my original July 2014 post on civil asset forfeiture, I took special umbrage towards forfeiture abuses in my hometown of Philadelphia. Sadly, the situation hasn’t changed.

According to the Institute of Justice, “Philadelphia [still] operates a forfeiture machine.” In the last decade, Philadelphia has expropriated $47 million in cash alone, along with 1,200 homes, 3,400 vehicles, and other items such as electronics and jewelry (items typically burglarized). Disgraced District Attorney Seth Williams, who hangs onto his job despite facing corruption charges which include stealing money meant for his mother’s retirement home, is a boisterous proponent of civil asset forfeiture, periodically rah-rahing the practice in our local newspapers.

When asked by a Philadelphia radio station why the City of Philadelphia would not return property in cases where owners were found innocent of their crimes, Assistant DA Beth Grossman responded, “Because I am not required to do so.” She went on to crow, “I think it’s a fabulous law.” 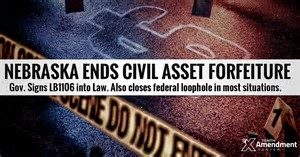 States Are Heading for the Exits

One year ago this week, the red state of Nebraska abolished civil asset forfeiture. Most notable, Nebraska now requires a criminal conviction to forfeit property. The state was reeling from headlines such as the $63,000 in cash taken from an Air Force veteran despite his never being charged with a crime.

According to Forbes, Nebraska was among the first states to take action against forfeiture, following North Carolina and New Mexico. The Cornhusker State joins nine other states which recently passed laws requiring a criminal conviction before forfeiting property. The “purple” mixture of states heading for the forfeiture exits indicates the bipartisan nature of this issue.

New Mexico was unique among the first states to abolish civil asset forfeiture in that it not only required a criminal conviction for forfeiture of property. The Institute for Justice:  “After securing a conviction, the government must prove in the same criminal proceeding that seized property is connected to the crime by ‘clear and convincing evidence.'”

New Mexico’s 2015 law opened the floodgates for several other states to apply their own standards in balancing justice and property rights. Hopefully lost in the shuffle: Taking someone’s cash and property for the sole reason of funding the police department and district attorney involved in the arrest.

That incentivizes official highway robbery. It erodes the moral authority of law enforcement. It is an assault on fair play.

At a time when we urgently need to show a kind face to the world, it erects a lurid display of American Greed.